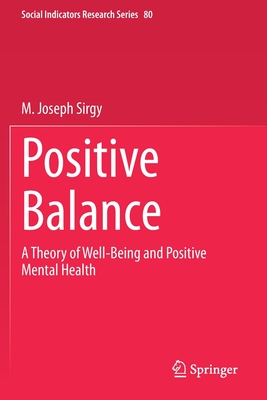 This is book number 80 in the Social Indicators Research series.

M. Joseph Sirgy is a management psychologist (Ph.D., U/Massachusetts) and the Virginia Tech Real Estate Professor of Marketing. He has published extensively in the area of marketing, business ethics, and quality of life (QOL). He is the author/editor of many books related to quality of life. He co-founded the International Society for Quality-of-Life Studies (ISQOLS) in 1995, served as its Executive Director/Treasurer from 1995 to 2011, and as Development Director (2011-present). In 1998, he received the Distinguished Fellow Award from ISQOLS. In 2003, ISQOLS honored him as the Distinguished QOL Researcher for research excellence and a record of lifetime achievement in QOL research. He also served as President of the Academy of Marketing Science from which he received the Distinguished Fellow Award in the early 1990's and the Harold Berkman Service Award in 2007 (lifetime achievement award for serving the marketing professoriate). In the early 2000's, he helped co-found the Macromarketing Society and the Community Indicators Consortium and has served as a board member of these two professional associations. He co-founded the journal, Applied Research in Quality of Life, the official journal of the ISQOLS, in 2005 and served as editor (1995-present). He also served editor of the QOL section in the Journal of Macromarketing (1995-2015) and editor in-chief (2020-present). He received the Virginia Tech's Pamplin Teaching Excellence Award/Holtzman Outstanding Educator Award and University Certificate of Teaching Excellence in 2008. In 2010, ISQOLS honored him for excellence and lifetime service to the society. In 2010 he won the Best Paper Award in the Journal of Happiness Studies for his theory of the balanced life; in 2011 also he won the Best Paper Award in the Journal of Travel Research for his goal theory of leisure travel satisfaction. In 2012 he was awarded the EuroMed Management Research Award for outstanding achievements and groundbreaking contributions to well-being and quality-of-life research. He also edited ISQOLS/Springer book series on Handbooks in Quality-of-Life Research and Community Quality-of-Life Indicators (Best Practices). He is currently one of the series editors of the Springer book series Human Well-Being and Policy Making. In 2019 the Macromarketing Society honored him with the Robert W. Nason Award for extraordinary and sustained contributions to the field of macromarketing through QOL research.