Introducing Ordinary African Readers' Hermeneutics: A Case Study of the Agĩkũyũ Encounter with the Bible (Religions and Discourse #54) (Paperback) 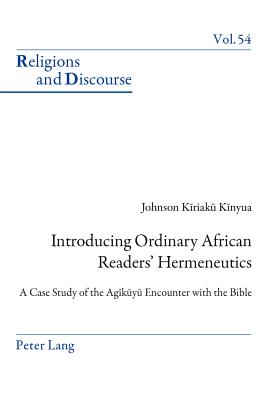 Introducing Ordinary African Readers' Hermeneutics: A Case Study of the Agĩkũyũ Encounter with the Bible (Religions and Discourse #54) (Paperback)

This is book number 54 in the Religions and Discourse series.

This book introduces the concept ordinary African readers' hermeneutics in a study of the reception of the Bible in postcolonial Africa. It looks beyond the scholarly and official church-based material to the way in which the Bible, and discourses on or from the Bible, are utilized within a wide range of diverse contexts. The author shows that ordinary readers can and did engage in meaningful and liberating hermeneutics. Using the Agĩkũyũ's encounter with the Bible as an example, he demonstrates that what colonial discourses commonly circulated about Africans were not always the truth , but mere representations that were hardly able to fix African identities, as they were often characterized by certain ambivalences, anxieties and contradictions. The hybridized Biblical texts, readings and interpretations generated through retrieval and incorporation of the defunct pre-colonial past created interstices that became sites for assimilation, questioning and resistance. The book explores how Africans employed allusion as a valid method of interpretation, showing how the critical principle of interpretation lies not in the Bible itself, but in the community of readers willing to cultivate dialogical imagination in order to articulate their vision. The author proposes an African hermeneutical theory, which involves the fusion of both the scholarly and the ordinary readers in the task of biblical interpretation within a specific socio-cultural context.
Johnson Kĩriakũ Kĩnyua is an adjunct professor of world religions at Georgia Perimeter College and an adjunct professor of religion and ethics at Saint Leo University, in Atlanta, Georgia USA.