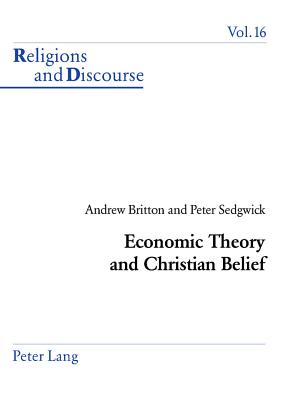 This is book number 16 in the Religions and Discourse series.

Any attempt to use the Bible as a basis for addressing contemporary economic issues needs to recognise the fundamental differences in underlying philosophy between economic theory and Christian belief. Neo-classical economic theory embodies a view of the world and of human nature, derived from the Enlightenment of the eighteenth century, which has become immensely influential in recent times. 'Economic man' is a rational, independent being, set in an environment of scarcity, but able to improve his welfare by transactions in a market economy. This 'anthropology' is explained and examined systematically in this book, following broadly the pattern of an economics textbook, and drawing on some recent work in methodology. In each chapter, a second part presents a contrasting view of the same subject matter drawn from the Bible as interpreted by contemporary scholars. This gives a radically different account of human life and well-being, centred on the community and its relationship with God, in which prosperity, abundance and hope for the future are divine blessings and gifts. Despite the wide gaps between economic theory and Christian belief some points of contact can be made, and there are suggestions as to how a dialogue between them might be conducted.
The Authors: Andrew Britton (1940) studied Modern History at Oxford and then joined the Government Economic Service as a cadet economist. He gained a masters degree with distinction at the London School of Economics. In 1982 he was appointed Director of the independent National Institute of Economic and Social Research. From 1995 to 1997 he served as Executive Secretary of the Enquiry into the Unemployment and the Future of Work set up by the Council of Churches for Britain and Ireland. He is a Reader in the Anglican diocese of Southwark, and Chairman of the Diocesan Board of Finance. Peter Sedgwick (1948) is a priest in the Church of England who has taught theology at the Universities of Birmingham (1979-1982) and Hull (1988-1994), and was a visiting scholar at the Center for Theological Inquiry, Princeton, New Jersey in 1991. He has worked for the Church of England Board for Social Responsibility since 1996 and edits their journal Crucible.