Adults as Children: Images of Childhood in the Ancient World and the New Testament (Religions and Discourse #17) (Paperback) 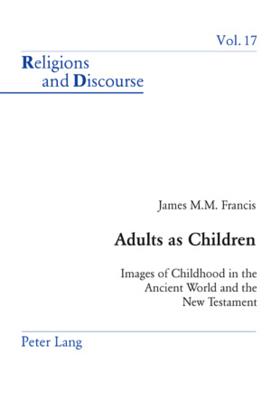 Adults as Children: Images of Childhood in the Ancient World and the New Testament (Religions and Discourse #17) (Paperback)

This is book number 17 in the Religions and Discourse series.

This book is a study of the image of the child in the teaching of Jesus and the literature of the New Testament set against the background of the ancient world, the Old Testament and Judaism. It also reflects on the complex relationship between attitudes to children and the imaging of the child. It is suggested that child imagery serves, generally speaking, as a window on tradition, and in religious discourse in particular it offers perspectives on the relationship between believing and belonging. In exploring how child imagery informs the teaching of Jesus, it is argued that his own use of such imagery, whilst not unique, being influenced primarily by the wider imagery of Israel as God's son (child) and servant, is nevertheless distinctive. As a metaphor symbolising primarily a call to change and renewal, it conveys in microcosm the central themes of his message of the kingdom of God. The study goes on to explore the meanings of child imagery in the theologies of the Gospel writers and in other New Testament literary contexts.
The Author: James M. M. Francis was formerly a senior lecturer in New Testament Studies at the University of Sunderland. He is currently Principal of the Ordained Local Ministry training course for the Diocese of Durham, England. He is a team vicar of Sunderland Minster and a non-residentiary canon of Durham Cathedral. He is general editor of the Series Religions and Discourse and has research interests in the fields of Biblical Studies (especially imagery) and Ministry.