Grace Overwhelming: John Bunyan, the Pilgrim's Progress and the Extremes of the Baptist Mind (Religions and Discourse #22) (Paperback) 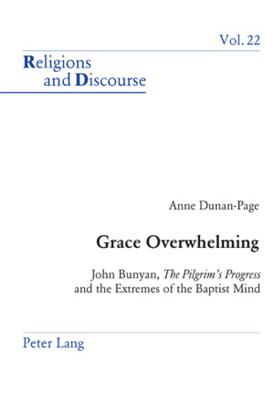 Grace Overwhelming: John Bunyan, the Pilgrim's Progress and the Extremes of the Baptist Mind (Religions and Discourse #22) (Paperback)

This is book number 22 in the Religions and Discourse series.

Awarded the 2007 National Research Prize SAES/AEFA.
This study is a reappraisal of John Bunyan in the light of the dissenting religious culture of the late-seventeenth century. Charges of schism and fanaticism were repeatedly levelled against Bunyan, both from within the dissenting community and without, but far from being chastened by these accusations, Bunyan responded with a religious discourse marked by a rhetoric of excess. The focus of this book is therefore upon Bunyan's overwhelming spiritual experiences, especially the representation of torment, in his literary and polemical works. The believers' suffering was an obsessive concern of dissenting ministers, even to the point where their writings are often remembered today for little else. Hitherto, most scholars have termed all the mental states that they invoke 'despair', but this simplifies the experiences at issue. A wealth of contemporary material helps to restore the nuances of seventeenth-century physical and spiritual conditions, from enthusiasm to melancholy and madness; from fear to desertion and sloth. These chapters explore fresh ways in which this subtle typology of torment and its extreme manifestations form the core of the literary expression of Restoration dissent, challenging Bunyan to represent spiritual equilibrium as the ultimate quest of the earthly pilgrimage.