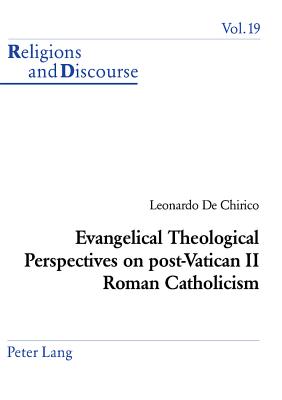 This is book number 19 in the Religions and Discourse series.

The Second Vatican Council (1962-1965) has forced Evangelical theology to rethink its own perception and analysis of Roman Catholicism. Many Evangelical theologians have attempted to grapple with the new Roman Catholic outlook and the ecumenical challenges it brings. After describing the theological contours of Evangelicalism, the book critically surveys the works on Roman Catholicism by Gerrit Berkouwer, Cornelius Van Til, David Wells, Donald Bloesch, Herbert Carson, John Stott, and two on-going international dialogues between Evangelicals and Catholics. The Evangelical appraisal of Roman Catholicism has in general suffered from a lack of systemic awareness in dealing with it. The prevailing approach has been marked by an interpretative atomism, and the last two chapters propose the formulation of an Evangelical systemic analysis. First, by supporting the feasibility of the category of system as applied to Roman Catholicism, thus developing the basic theological hermeneutics proposed by Abraham Kuyper. Second, by indicating in the Roman Catholic articulations of the relationship between nature and grace and in the ecclesiological self-understanding of the Roman Church the two main theological foci of the system.
The Author: Leonardo De Chirico holds degrees in modern history (University of Bologna) and theology (Evangelical Theological College of Wales). In 2003 he received his Ph.D. on the contemporary Evangelical interpretations of Roman Catholicism at King's College, London. He is Adjunct Director of the Istituto di Formazione Evangelica e Documentazione (IFED) in Padova (Italy) and editor of its theological journal Studi di teologia. His previous books include Il movimento evangelicale (Brescia, 2002) written with Pietro Bolognesi.