Dogmatics Among the Ruins: German Expressionism and the Enlightenment as Contexts for Karl Barth's Theological Development (Religions and Discourse #21) (Paperback) 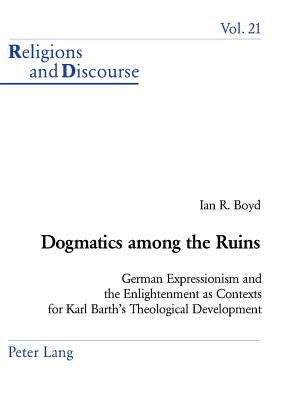 Dogmatics Among the Ruins: German Expressionism and the Enlightenment as Contexts for Karl Barth's Theological Development (Religions and Discourse #21) (Paperback)

This is book number 21 in the Religions and Discourse series.

In the second decade of the twentieth century the cultural life of Germany was transformed by the emergence of Expressionism, a series of vigorous, youthful artistic movements which were to exert a lasting influence on modern culture. In the same decade a young Swiss pastor called Karl Barth began a theological revolution, laying the foundations for probably the most influential body of Christian theology in the modern age. Some relationship between these two revolutions has long been assumed by scholars; yet it has never been examined in detail. The first part of this study addresses this omission, offering the most detailed analysis to date of the important relationship between Barth and Expressionism. The second part of the book takes a broader look at both Barth's theology and Expressionist culture, considering the relevance of the Enlightenment as a context for both. The key to this is a detailed discussion of Barth's own analysis of the Enlightenment in his neglected book Protestant Theology in the Nineteenth Century. Barth's view is also compared with Alasdair MacIntyre's treatment of the Enlightenment in After Virtue. The examination of these two contexts, German Expressionism and the Enlightenment, yields valuable insights into Barth's entire theological project.
The Author: Ian Boyd has an M.A. in Philosophy and a BD in Systematic Theology from the University of Glasgow. He was awarded a Ph.D. by the University of Edinburgh in 1996 for his research into the relationship between Karl Barth's theological development and its context in cultural history.