Women's Spirituality in the Twentieth Century: An Exploration Through Fiction (Religions and Discourse #20) (Paperback) 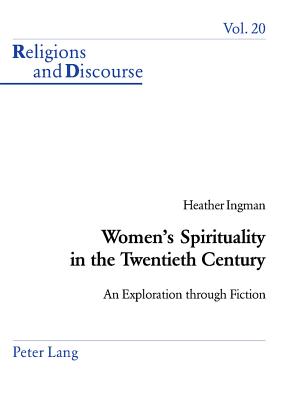 Women's Spirituality in the Twentieth Century: An Exploration Through Fiction (Religions and Discourse #20) (Paperback)

This is book number 20 in the Religions and Discourse series.

This book applies insights from feminist theology to highlight spiritual themes in twentieth-century fiction by women writers. The author traces the way women writers of the twentieth century have not only challenged religious discourse but employed spiritual themes in order to explore more fluid possibilities of gender and identity. The book is wide-ranging in its choice of authors. As well as British and American writers, Irish, African-American, Canadian, Jewish and Caribbean women writers are discussed. Spirituality in women's fiction embraces a wide range of themes. After an introductory chapter sketching out developments in feminist theology for the non-specialist reader, there are chapters on the convent school and the role of the Virgin Mary, the Goddess, the female mystic, womanist spirituality and ecofeminism. The book demonstrates the way in which many women writers attempt to preserve a dialogue between traditional religious discourse and women's contemporary religious experience. The determinedly secular stance of much feminist literary criticism has led to a downplaying of spiritual themes in twentieth-century women's fiction. This study provides a bridge between feminist literary criticism and feminist theology.
The Author: Heather Ingman studied English and French at London University and gained a Ph.D. in French from the University of London and a Ph.D. in English literature from the University of Loughborough. She currently lectures on women's literature in the English Department, Trinity College, Dublin and in TCD's Centre for Gender Studies. Her most recent academic publications are Women's Fiction between the Wars and Mothers and Daughters in the Twentieth Century: A Literary Anthology. She has also published seven novels.