After the Market; Economics, Moral Agreement and the Churches' Mission (Religions and Discourse #23) (Paperback) 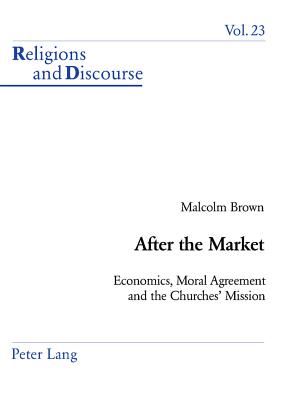 After the Market; Economics, Moral Agreement and the Churches' Mission (Religions and Discourse #23) (Paperback)

How are the churches to say anything useful about the market economy which is so dominant in everybody's life today? Too often, Christian responses have failed to take the moral arguments for markets seriously enough. The market's assertions of liberal individualism and the impossibility of agreement about distributional justice undermine much Christian comment and church practice.
Old divisions within Christian ethics offer little help. Liberal theologies share so many foundations with the market that their critique has been muted or incoherent. Yet communitarian theologies, currently in the ascendancy, show little interest in economics and are not alert to the central dilemmas which markets seek to address.
The book critiques much of the churches' recent work on economic issues and proposes a renewed theological seriousness for mission in the economy, where the Christian faith might contribute authentically to moral agreement in a plural age.
The Author: Malcolm Brown is Principal of the East Anglian Ministerial Training Course in the Cambridge Theological Federation. He has previously worked in Industrial Mission and was, until 2000, Executive Secretary of the William Temple Foundation, an ecumenical research and training unit focussing on theology, the economy, and urban communities. His previous publications include Putting Theology to Work, co-edited with Peter Sedgwick (1998).