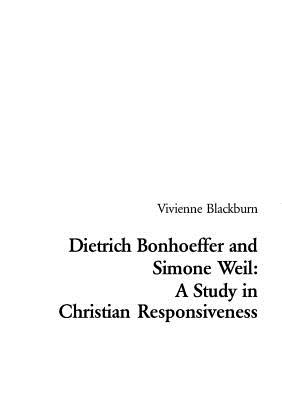 This is book number 24 in the Religions and Discourse series.

The book is the first major study to bring together the two early twentieth-century theologians Dietrich Bonhoeffer, German Lutheran pastor, and Simone Weil, French philosopher and convert to Christianity. Both were victims of Nazi oppression, and neither survived the war. The book explores the two theologians' reflections on Christian responsiveness to God and neighbour, being the interdependence of the two great commandments of the Jewish Law reiterated by Jesus. It sets out the common ground and the differing emphases in their interpretations. For Bonhoeffer, responsiveness was the transformation of the whole person effected by faith (Gestaltung), and the responsibility (Verantwortung) for one's actions which it implies. For Weil, responsiveness was the hope and expectation of grace (attente) reflected in attention, the capacity to listen to, understand and help others. Both Bonhoeffer and Weil faced a world dominated by aggression and horrendous suffering. Both endeavoured to articulate their responses, as Christians, to that world. The relevance of their thought to the twenty-first century is explored, in relation to perspectives on grace and freedom, on aggression, suffering, and forgiveness, and on the role of the church in society. Conclusions are illustrated by reference to contemporary theologians including Rowan Williams, Daniel Hardy, Frances Young and David Tracy.
The Author: Vivienne Blackburn's book is based on her Ph.D. in theology, awarded by the University of Leeds after her retirement from a career in education as a modern languages specialist. She held posts as a university lecturer in modern languages, a government inspector, and a consultant to the EU on the in-service training of teachers. She brings to this study a deep knowledge of French and German language and culture, and experience of human relations in a variety of contexts.