A Theology for Europe: The Churches and the European Institutions (Religions and Discourse #28) (Paperback) 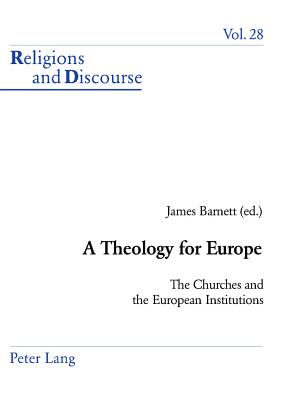 A Theology for Europe: The Churches and the European Institutions (Religions and Discourse #28) (Paperback)

This is book number 28 in the Religions and Discourse series.

This volume is about the partnership of the Christian churches in their dialogue with the European Institutions. In a context of plurality the discourse between religion, society and political institutions requires a descriptive and reflective theology that is both informed by the received tradition and provisional enough to share the universal quest for truth and justice. Contributors represent many aspects of European culture, history and recent political development.
The book confronts European history, the contribution of civil society in gaining freedom from political oppression and the experience of the churches in victory and defeat. In treating discourse between and among people of political conviction and religious faith it adopts an accessible method and addresses politicians, religious leaders and thinkers in a common framework and language.
The Editor: James Barnett is an Anglican clergyman and an educationalist. He was head of Religious Studies at Uppingham and set up lay training schemes in Oxford and Truro. From 1995-2001 he was the Archbishop of Canterbury's Representative at the European Institutions and now represents the Inter-European Commission on Church and School at the Council of Europe.