Synthesizing the Vedanta: The Theology of Pierre Johanns, S.J. (Religions and Discourse #32) (Paperback) 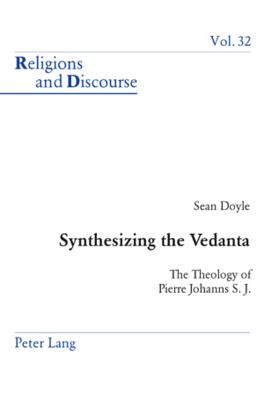 Synthesizing the Vedanta: The Theology of Pierre Johanns, S.J. (Religions and Discourse #32) (Paperback)

This is book number 32 in the Religions and Discourse series.

Fr Pierre Johanns is a key figure in the history of Christian intellectual engagement with Hindu philosophy. He was the most articulate figure in a group of Belgian Jesuits in Calcutta who sought to develop the theological project initiated by Brahmabandhab Upadhyay, a convert to Catholicism whose theology conveyed a positive appreciation of aspects of Hindu advaitic philosophy. Johanns began to publish a steady stream of articles in the monthly Light of the East that analysed pertinent features of Vedantic thought from the perspective of his neo-Thomistic presuppositions. Johanns engaged in a thorough explication and analysis of the thinking of the Hindu teachers Sankara, Ramanuja, and Vallabha. He attempted to fashion a creative synthesis of their views, constructing a new, holistic metaphysic from the raw material of their respective philosophical theologies.
This book examines the theological writings of Pierre Johanns by situating him within his historical context, by discussing how Johanns interacted with Vedantic philosophy, and by assessing the success of his project.
The Author: Sean M. Doyle received an M.A. in Religion from Gordon-Conwell Theological Seminary in 2001. He was awarded a Ph.D. in 2005 from the University of Edinburgh. He is currently assistant professor of Religion at Methodist College in Fayetteville, North Carolina.