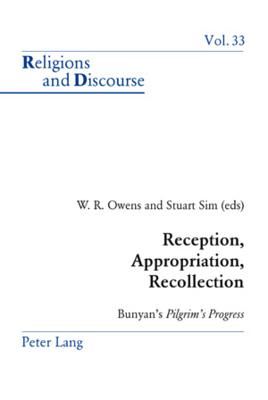 This is book number 33 in the Religions and Discourse series.

The ten essays that make up this volume are drawn from papers delivered at the fourth triennial conference of the International John Bunyan Society. A theme of the conference was the extraordinary reception history of The Pilgrim's Progress: how it has been translated, adapted, illustrated and read within different cultures over the past three centuries. As contributors here demonstrate, Bunyan's book has influenced - in sometimes unexpected ways - writers as diverse as Dickens, George Eliot, Charles Kingsley, Mary Ward, William Hale White, Louis MacNeice and Samuel Beckett. Through the agency of missionary translators it circulated internationally, and in the process was transformed and read in a wide variety of ways by different groups of readers. Romantic critics including Southey, Scott and Macaulay established it as a 'classic' text, but illustrators, editors and publishers also figured importantly in the process of its literary canonisation. Bunyan even made a brief appearance in one of the most famous films of the Second World War, Powell and Pressburger's A Matter of Life and Death. What the volume as a whole reveals is the extraordinary influence of The Pilgrim's Progress and its continuing capacity to inspire the imagination of all kinds of readers.
The Editors: W. R. Owens is Professor of English Literature at The Open University. Stuart Sim is Professor of Critical Theory at the University of Sunderland.