Saving Beauty: Form as the Key to Balthasar's Christology (Religions and Discourse #34) (Paperback) 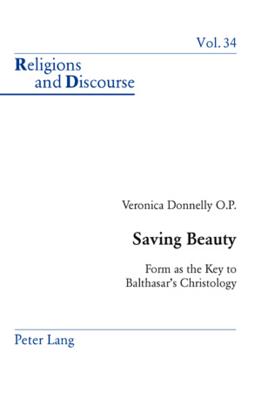 Saving Beauty: Form as the Key to Balthasar's Christology (Religions and Discourse #34) (Paperback)

This is book number 34 in the Religions and Discourse series.

Balthasar is one of the most influential of Catholic twentieth-century theologians, and his oeuvre is astonishing in its range and amplitude. This together with a style of writing that is cyclic rather than systematic makes his work difficult to assimilate. The author has overcome this obstacle by finding an integrating motif that makes coherent sense of the whole. That motif is the concept of 'form'.
The first section of the book deals with that 'form' its genesis, its meaning as a whole which is greater than the sum of its parts, and as a revelation of the mystery of Being.
Section two shows how, when the concept is applied christologically, it signifies the incarnate form of Jesus as expressing the glory of the triune God, the source of Being.
Section three, which deals specifically with Balthasar's soteriology, demonstrates how because of his mission to save a sinful world the form of Jesus has to undergo suffering and death and become apparently 'formless'. While indicating that the main lines of Balthasar's theology are rooted in tradition, the book also illustrates the radicalness of his approach. His dialogue with theologians and philosophers, both ancient and modern, is discussed and evaluated throughout.

The Author: Veronica Donnelly was awarded her Doctorate in Divinity by the Pontifical University of Maynooth in 2003. She has also studied at the University of Salamanca, Spain and the Angelicum in Rome, and has lectured at Sion Hill College, and at University College Dublin. Veronica Donnelly also served on the Executive Team of the Irish Theological Association.