From Revolution to Migration: A Study of Contemporary Cuban and Cuban American Crime Fiction (Hispanic Studies: Culture and Ideas #8) (Paperback) 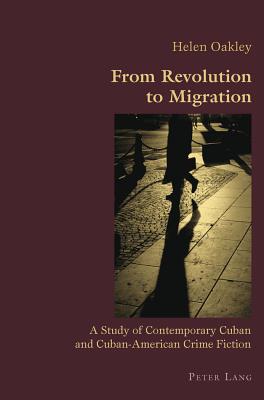 From Revolution to Migration: A Study of Contemporary Cuban and Cuban American Crime Fiction (Hispanic Studies: Culture and Ideas #8) (Paperback)

This is book number 8 in the Hispanic Studies: Culture and Ideas series.

This book focuses on Cuban and Cuban-American crime fiction of the 1990s and early twenty-first century. Contemporary authors, writing in both English and Spanish, have created new hybrid forms of the crime fiction genre that explore the problematic cultural interaction between Cuba and the United States. Through an analysis of the work of writers such as Leonardo Padura Fuentes, Jos Latour and Carolina Garcia-Aguilera, the author investigates issues which include the oppression of the individual by the state within Cuba, constructions of masculinity and femininity, and the problems facing Cuban immigrants entering the United States.
The author demonstrates how contemporary writers have been influenced both by the American hard-boiled crime fiction genre and by the legacy of the socialist detective fiction that was promoted in Cuba by the Castro regime in the 1970s. By focusing on works produced both within and outside of Cuba, the book taps into wider debates concerning the concept of post-nationality. The cultural fluidity that characterizes these new variants of crime fiction calls into question traditional boundaries between national literatures and cultures.
Helen Oakley was awarded her doctorate by the University of Nottingham for a thesis that was later published as The Recontextualization of William Faulkner in Latin American Fiction and Culture (2002). She is an associate lecturer in the arts at the Open University in the East Midlands.