For the Joy Set Before Us: Methodology of Adequate Theological Reﬂection on Mission (Religions and Discourse #37) (Paperback) 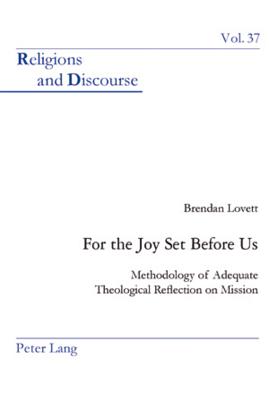 For the Joy Set Before Us: Methodology of Adequate Theological Reﬂection on Mission (Religions and Discourse #37) (Paperback)

This is book number 37 in the Religions and Discourse series.

Modern developments in both science and history challenge us to a far greater degree of empiricism than has been traditionally considered necessary in the study of theology. Any attempt to move in this direction can be signiﬁcantly helped by Bernard Lonergan's breakthrough discovery of the notion of functional specialties in 1965. The strategy of this book is to make use of this discovery and provide a theological reflection on mission appropriate to the present age.
The author begins with an insight available from biblical research but absent from current theologies of mission. This is the general recognition that the texts concerning a universal mission are in fact an instance of retrojection. Building on this through an interpretation of Lonergan's functional specialties of interpretation and history, he unfolds the startling implications for grasping the central creative signiﬁcance of the 'word of God'. As the argument transfers from one specialty to the next, it moves towards ever-richer empiricism, culminating in the specialty of communications.
Here the creativity which will be needed to address faithfully the message of Jesus to our contemporary world in all its complexity becomes apparent.

The Author: Brendan Lovett is an ordained member of the Missionary Society of St Columban. He has been working in the Philippines since 1967, apart from a period for doctoral studies in Muenster (1972-5) which was followed by a four-year teaching assignment in Sydney. He has worked predominantly in the ﬁeld of theological education.