Christ and Creation: Christology as the Key to Interpreting the Theology of Creation in the Works of Henri de Lubac (Religions and Discourse #40) (Paperback) 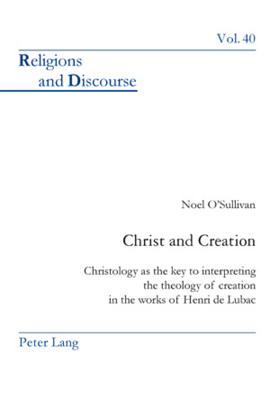 Christ and Creation: Christology as the Key to Interpreting the Theology of Creation in the Works of Henri de Lubac (Religions and Discourse #40) (Paperback)

This is book number 40 in the Religions and Discourse series.

This book sets out to interpret Henri de Lubac's theology of creation from a christological perspective. The challenge of this research has been the absence of a systematic christology in the writings of de Lubac. Yet it is possible to posit a Lubacian christology by sifting through the author's work on a myriad of subjects. The point of entry is the patristic distinction between 'image' and 'likeness', whereby 'image' is understood as an inamissible seal which bestows the divine prerogatives of reason, freedom, immortality and dominion over nature. 'Likeness' is a potential given at creation and realised in the course of the economy of salvation. De Lubac describes it variously as divinisation, divine union, the supernatural dignity of the human being, and participation in the internal movement of the Trinity. The originality of this book consists in the gradual emergence of the role of Christ in the process whereby image becomes likeness. De Lubac records his intention to publish a book on Jesus Christ, an ambition he never realised. The present book does not just illustrate the omnipresence of Christ in the writings of de Lubac but dares to delineate what a Lubacian christology would look like.
The Author: Noel O'Sullivan was Dean of Students at St Patrick's College, Maynooth, where he studied for his B.A. and B.D., and then President of St Finbarr's College, Farranferris, Cork. He was awarded a doctorate in theology by the Institut Catholique, Paris, and now lectures in systematic theology at St Patrick's College, Thurles, County Tipperary.