Bunyan and Authority: The Rhetoric of Dissent and the Legitimation Crisis in 17th-Century England (Religions and Discourse #6) (Paperback) 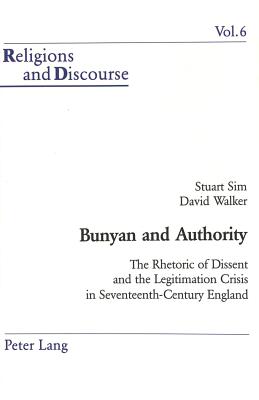 Bunyan and Authority: The Rhetoric of Dissent and the Legitimation Crisis in 17th-Century England (Religions and Discourse #6) (Paperback)

This is book number 6 in the Religions and Discourse series.

The range of John Bunyan's work, fictional and non-fictional, is rarely captured in literary studies; nor is he often the subject of theoretically-informed readings as in the postmodern perspective adopted in this study. Jean-Fran ois Lyotard's conception of postmodernism as an attitude of 'incredulity towards grand narratives' is particularly appropriate to the situation in seventeenth-century England, where the traditional narratives of church and state collapsed in the 1640s leaving a full-scale legitimation crisis in their wake. The authors explore Bunyan's complex, and often highly subversive attitude to institutional authority, as expressed in a writing career ranging from the pamphlets of the 1650s through to the fiction of the 1670s and 80s, against a backdrop of bitter conflict between incommensurable cultural narratives. Bunyan and Authority opens up new lines of approach to an author central to the development of the nonconformist tradition in English life, and its provocative conclusions hold important implications for the study of seventeenth-century English literature, history, and religion.