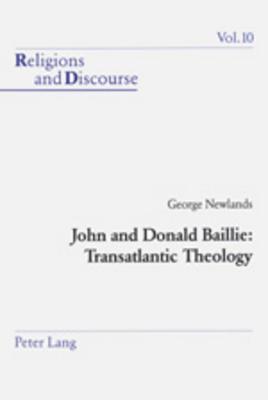 This is book number 10 in the Religions and Discourse series.

John and Donald Baillie were twentieth-century Scots theologians whose influence extended widely around the world. This is an intellectual biography of the brothers, based on a large collection of papers, diaries and letters which has recently become available. It is both a study in the interaction of theology and culture and an argument for the development of a new critical liberal theology.
The Baillie papers show theology being shaped by language and culture in a transatlantic interchange. The brothers and their social circles played a central role in European and American ecumenical, church and social life in the critical decades before and after the 1939-45 war. Their work remains an important resource for an open and inclusive theology.
John Baillie taught in the United States and Canada from 1919 to 1934 before returning to Scotland. He came back to America most years until 1959. He was one of the first Presidents of the World Council of Churches.
Donald Baillie, Professor in St Andrews, was the author of God was in Christ, perhaps the most widely read essay in twentieth-century Christology.

The Author: George Newlands is Professor of Divinity in the University of Glasgow, Scotland.