Amma, Tell Me about Diwali! (Amma Tell Me #2) (Paperback) 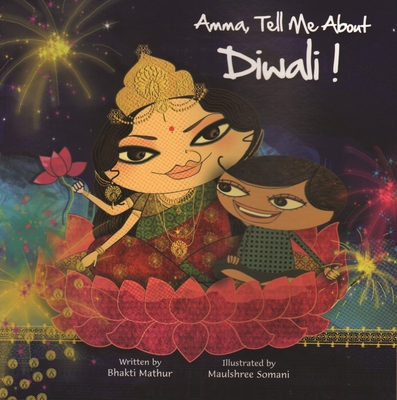 Amma, Tell Me about Diwali! (Amma Tell Me #2) (Paperback)

This is book number 2 in the Amma Tell Me series.

Brilliant firecrackers lighting up the night,
Diyas twinkling like stars - what a sight
This is Diwali, in all its glory,
As told to little Klaka - a magical story.

First the celebration of Prince Rama and his homecoming,
His victory over Ravana, the evil demon King.
Next a story of Lakshmi, the Goddess of wealth
Who rewards her true devotees with fortune and health.

Amme Tell Me is a charming and informative series of children's books that introduces the major Hindu festivals and figures to young readers, and are perfect for families wanting to share stories of Hinduism with their children or for educators looking for resource on the Hindu culture for their students. Written in rhyme with vivid, captivating illustrations, this series brings Hindu mythology to its readers in a fun and non-preachy way. The Series has ten books on the festivals of Holi, Diwali, and on the Hindu gods Krishna, Hanuman and Ganesha.

Bhakti Mathur grew up in Delhi, India. She lives in Hong Kong, a city that she absolutely adores, with her husband, her two sons, Shiv and Veer, and their beloved golden Labrador, Frodo. She is a banker by profession and currently works for a major Asian Bank.Bhakti's love for books started from a young age. Her mother was a librarian and as a child she landed up spending many hours in the library--books proved to be great and inexpensive baby sitters! The idea for the 'Amma, Tell Me' series of books came as a way to introduce her sons to Indian mythology and festivals.When not writing, working or running after her boys, she is happiest curled up with a book and a hot cup of chai.