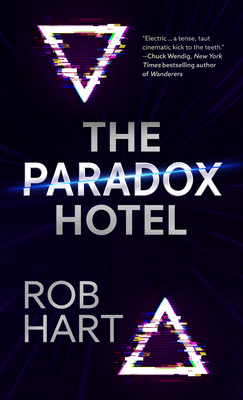 
Not on our shelves. Usually ships in 2-5 days.
An impossible crime. A detective on the edge of madness. The future of time travel at stake. From the author of The Warehouse . . . "An engrossing and thought-provoking sci-fi mystery that is also an achingly beautiful meditation on grief and the pain of lost love."--S. A. Cosby, New York Times bestselling author of Razorblade Tears ONE OF THE MOST ANTICIPATED BOOKS OF 2022--CrimeReads January Cole's job just got a whole lot harder. Not that running security at the Paradox was ever really easy. Nothing's simple at a hotel where the ultra-wealthy tourists arrive costumed for a dozen different time periods, all eagerly waiting to catch their "flights" to the past. Or where proximity to the timeport makes the clocks run backward on occasion--and, rumor has it, allows ghosts to stroll the halls. None of that compares to the corpse in room 526. The one that seems to be both there and not there. The one that somehow only January can see. On top of that, some very important new guests have just checked in. Because the U.S. government is about to privatize time-travel technology--and the world's most powerful people are on hand to stake their claims. January is sure the timing isn't a coincidence. Neither are those "accidents" that start stalking their bidders. There's a reason January can glimpse what others can't. A reason why she's the only one who can catch a killer who's operating invisibly and in plain sight, all at once. But her ability is also destroying her grip on reality--and as her past, present, and future collide, she finds herself confronting not just the hotel's dark secrets but her own. At once a dazzlingly time-twisting murder mystery and a story about grief, memory, and what it means to--literally--come face-to-face with our ghosts, The Paradox Hotel is another unforgettable speculative thrill ride from acclaimed author Rob Hart.
Rob Hart is the author of The Warehouse and the Ash McKenna crime series, and he co-wrote Scott Free with James Patterson. He's worked as a book publisher, a reporter, a political communications director, and a commissioner for the city of New York. He lives on Staten Island.