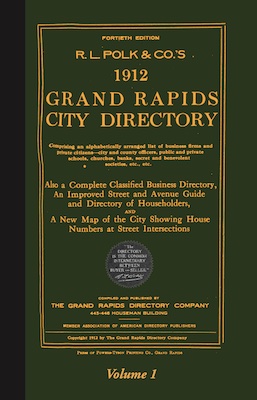 The original directory was 1500+ pages. Because of technical restrictions with the number of pages that we are able to bind together with our Espresso Book Machine, we had to divide this book into three volumes.

Relevance of the 1912 Grand Rapids City Directory: 1912 was the year that Grand Rapids switched to the current street addressing system.  In the 1912 directory are listed both the old and new street addresses for all businesses and dwellings.  For the purposes of research, this is most helpful when wanting to make this transition when either going forward or backwards in time.  It is an important Grand Rapids reference work.

In the main body of the directory (volume 1 and volume 2) only the new 1912 street number addresses are shown under the individual or business names. In volume 3 “The Street and Avenue Guide & Directory of Householders”, there are listings for both the new and old (in parentheses) street numbers for each individual and business along the entire length of a street…the streets being arranged alphabetically by name and subdivided by block.

"In 1912, the City of Grand Rapids established the current house numbering system and changed a number of names.  They also attempted to delete duplicate names, particularly for streets whose name, if not the actual physical street, ended at the Grand River  (i.e. separately existing streets named , First, Second, Third etc. on each side of the Grand River).

The 1912 issue of the City Directory publicly printed the resultant changes with one error.  They mention a Wren street that doesn't seem to have existed.  But the City Directory did not have any legal authority and was not the source of the name changes. The City Commission was the source and the City Engineer was the one responsible for keeping track of these changes.

As the City grew, it annexed lands and tried to make the newly annexed, existing street names fit existing City streets and names.  That often necessitated changing the names of the newly acquired streets, e.g.  Dosker Street was changed to Baxter Street in 1892 after it was annexed in 1891.  Baxter Street had only existed for two blocks in the City until then, and was made longer by the annexation of the adjoining Dosker Street.

The City made another attempt in 1920 by giving the same name to different streets.  Now if you see an older street stop and then start up again, or jog, it was probably composed initially of different street names.  Paris and Prospect are good examples.  They used to be lots of different named streets.

The building of the freeways through the old part of the city added to the confusion by ending streets that used to go through where the freeway is,  and by creating strangely configured service drives.  Names of the chopped up portions were often re-attached to a different street and given its name.  Industrial Parks have added to the confusion as have condominiums.

In addition, streets were sometimes named without any regard for past traditions.  The former simple rules of roads going east and west being called a street, north and south called an Avenue, short streets going north and south called Places, east and west called courts, were sometimes ignored and Drives, Circles, and other street modifiers were added to street names.

Researchers should know that old changes prior to 1912 may need to be verified by checking the original plat maps located on microfilm in the County Register of Deeds and on the web: http://www.cis.state.mi.us/platmaps/sr_subs.asp

it appears that Ann street did not go to the river but ended as it curved into Broadway. Ann's counterpart across the river was called Victoria.  Eventually Ann was run straight across the river.  The curved left-over portion was renamed Broadway.

Curved Grandville ended at Bartlett.  Then most of Ellsworth running north to south formerly Summit was renamed as  a straight continuation of curved  Grandville except for the two blocks between Wealthy and Bartlett which remained Ellsworth.  It doesn’t help that Cherry Street SW used to be called Ellsworth.