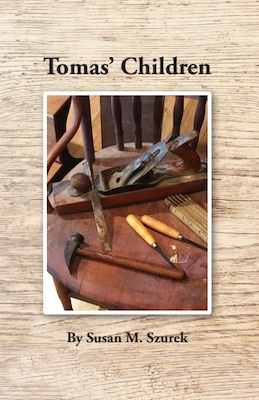 As Tomas watched his third child come into the world accompanied by screams and blood and puke, he wondered whether he should drown it in the same manner his father used to drown the kittens on the farm.

For generations, the Allerton family men worked as carpenters and furniture makers.  They made bookcases and tables and bed frames; they whittled and carved keepsake boxes and whirligigs and canes; they repaired door frames and replaced rotted crates.  And they made caskets and helped in the burial of the inhabitants when it was required.  The family had settled in Levett, Illinois, a farming community with a middling town containing a post office, a general store and a hardware store, a church, a schoolhouse.  This was the spot Tomas grew up, where he learned his trade, where he lived an austere and harsh existence.

This was the life Tomas Allerton left to travel to unknown places, new circumstances, strange locales.