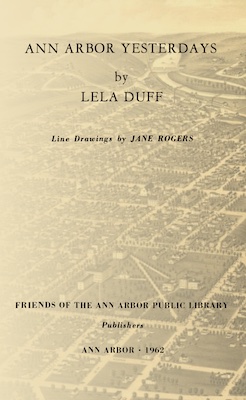 As those of us know who read the pieces as they were pub­lished from February 1960 to July 1961, and who encouraged the author to write them, all the aspects of a growing town are in this book. It deals with the people, the events, the problems, the joys and the sorrows that make a town. To note but a few:

The founders, John Allen and Elisha Walker Rumsey, their wives, Ann Allen and Mary Ann Rumsey, for whom the town was named; these people founded the town, planned it, and in­vested their futures in it-

The men and women who joined the founders and gave the place meaning through their work, and who tied their ambitions to it, their hopes, and their ideals-

Ann Arbor's part in the nation's wars, from the Civil War through Armistice Day, 1918-

Ann Arbor's churches, its social life, its winter- and sum­mer-weather pleasures, its ice cream parlor, the freshly roasted peanuts, large bagfuls at a nickel a bag-

The organ factory, the singing societies, the choirs, the May Festival-

The changes that made the town a city, the struggles for a public water system, for public transportation, for public light­ing-

The passing of the livery stable, the coming of the auto­mobile, with gasoline tax-free and priced at eleven cents a gallon-

These are several of the many homely and familiar things of the past which Miss Duff has included in Ann Arbor Yester­days. When the Ann Arbor News agreed with her to publish her pieces as a column under the title "Ann Arbor Yesterdays," the News asked co-operation from its readers in answering questions about the city's past. Among these, there was the question "What remnants of the past remain in the present as reminders of the city's heritage?"

Miss Duff's book not only answers this question, it offers many reasons why former residents, including alumni of the University, express a longing to return to "dear Ann Arbor town," the only town by that name in all the world.

As in her earlier book, Pioneer School, a history of Ann Arbor High School, Miss Duff has managed, in addition to her descriptions of people and places, to introduce a quality of nostalgia and of affection. She has fashioned a fine tribute to Ann Arbor, the town she is proud to call her own. All who share that pride owe Miss Duff a debt of gratitude for her work. Speaking for Ann Arborites generally, I gratefully extend to her our very best thanks.