Anthology of Poems by William B. Winegar 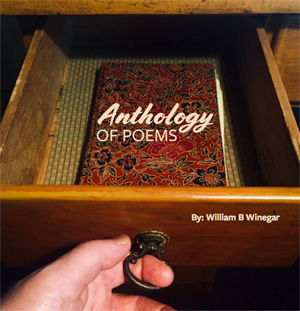 William Winegar, is known as Bill to his friends and family, lives in Walker, Michigan with his loving wife Karen of 35 years and his fourteen -year-old dog Scruffy. Bill and his wife have one grown son, Bruce. William is also a veteran of two branches of the military, the U.S. Navy and the U.S. Air Force, and is proud of his combined service time of 8 years active duty. He has written his poems over a period of years and many of his poems are the result of his life’s experiences, including the military and the jobs he has held.

Some of the jobs William has held include: Aircraft Mechanic, Administrative Assistant, and CDL truck driver. William enjoys a wide range of music including Phil Collins, John Mellencamp, Bruce Springsteen, Billy Joel, Billy Ocean, Enya and others along with an occasional Mozart. He also enjoys all outdoors activities with his wife such as rollerblading, biking, long walks and swimming and rustic camping. Some of the other interests on William’s list are Business News and World Politics, including having a good discussion on the subject at hand. William currently occupies his time as a volunteer with the Walker Police Department and Grand Rapids Home for Veterans.

All poems are original and copyrighted by the author.