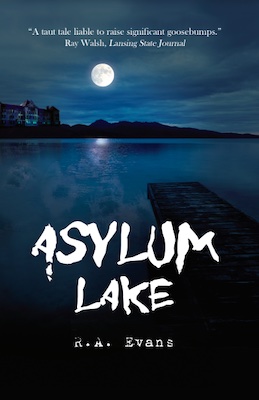 In 1917, the state's second largest psychiatric hospital opened on six hundred wooded acres overlooking a small lake near Bedlam Falls, Michigan. Through its doors came the weak and the weary, the disabled and the discarded, the frail and the forgotten. But an open door is an invitation, and some visitors, once invited, are loath to leave. The hospital abruptly closed in 1958 under a cloud of mystery. It has remained empty and silent, save for the memories trapped both within its walls and far below the surface of the nearby lake that bears its name. At the bottom of Asylum Lake, the unremembered are growing restless.

Brady Tanner is trying to outrun memories of his own. After the sudden death of his wife, Brady retreats to the small town where he spent the summers of his youth. But he soon learns small towns can be stained by memories... and secrets, too. As Brady is drawn into unearthing these secrets, as he discovers a new love in an old friend, he is also drawn into the mystery of Asylum Lake and the evil that lies submerged beneath its sparkling surface. What is the source of this evil - and what does it want with Brady Tanner?