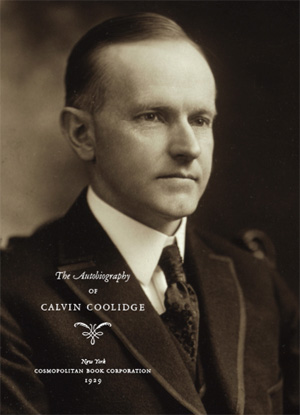 Author in Chief, https://www.schulerbooks.com/book/9781476786391 a book that explores American Presidents and the books they wrote, was published on February 11, 2020. NPR interviewed the author Craig Fehrman about different books and he mentioned The Autobiography of Calvin Coolidge, a book that is now out of print but that we were able to bring back into print thanks to our Espresso Book Machine.

From the NPR interview:

On a presidential book that stands the test of time

My favorite book that I discovered, and you can find it online — I'm not sure if it's still in print — was an autobiography by Calvin Coolidge. This came out in 1929. As soon as he had finished his presidency. And honestly, I think most people don't even remember Calvin Coolidge's presidency, much less the fact that he was a wonderful writer, but he really was a great writer. And that helped him become president. And that helped him write a great autobiography. H.L. Mencken, I don't think he liked anything about Calvin Coolidge except his prose style, but that prose style really shines through in the autobiography.

And what I loved about Coolidge's autobiography is first, it's short. It's only a couple hundred pages, which is certainly a marked contrast to most presidential memoirs. And it's just so personal. Coolidge doesn't get into political debates or talk about his favorite policies. He talks about what it felt like to be president and the best example is that his son passed away while he was president. And they are just heartbreaking passages where Coolidge talks about — I was the most powerful person in the world, but I had no power to save my son's life. And I wish more presidents would write about their experiences in the White House that way. Tell us what it felt like to be president. Show us the human being.