Counter Threat: My Life Inside the Other Secret Service by Steven M. Schenck 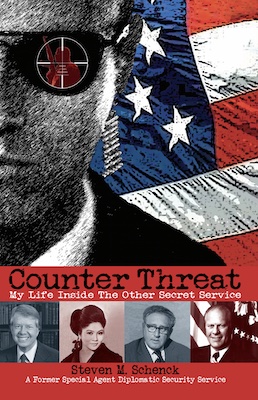 THIS COMPELLING BOOK is a compilation of true stories about the author’s life and dangerous encounters while protecting famous dignitaries during historic world events. The author is a former Special Agent In Charge of Dignitary Protection Details, with the US State Department’s Diplomatic Security Service (DSS). He is a former international security specialist and is a Special Investigator, under contract, for multiple federal agencies. Doubtless few have ever heard of DSS or of its often covert missions to counter terrorism and enhance national security. The details of his assignments had been closely guarded secrets . . . until now.

The author shares fresh information about the second 9/11 attack, which occurred in 2012 at the US Consulate in Benghazi, Libya, and about the US mission in El Salvador during a raging civil war. There, the US Ambassador and his team of agents, including the author, were taken hostage. Other accounts reveal little known facts about the hostage rescue attempt in Tehran and a near deadly mistake aboard Air Force One. The author also shares his memoirs of guarding the Kissingers in Israel and other dignitaries and notables including Van Cliburn, Andy Warhol, and Elizabeth Taylor. A heartwarming story is told of the author’s attempt to adopt an abandoned infant, and of a near fatal bomb explosion near the infant’s crib. The material in this book is original, harrowing and exciting.