Drinking With Dead Friends and other stories by Walter Lockwood 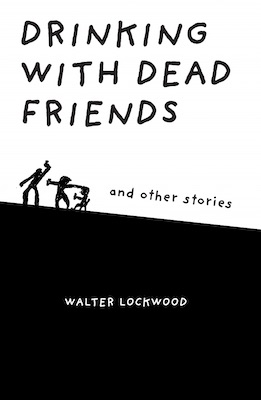 The stories in this book deal with singular and life-altering experiences of an assortment of characters.  An adolescent girl with a super star older sister finds her way into a world to which her sister has no key; a retired college president encounters an angel in his gardens; an old man meets his two best friends, both long dead, in a bar on “hymns and beer night”; a journalist pursues a dream woman who has haunted him since adolescence; a young pastor is left a large and troublesome inheritance by an eccentric parishioner; a married woman is tempted by a seminary student; a neophyte screenwriter learns Hollywood’s realities from an aging actress.  These stories and others, most published for the first time, make up this volume of eighteen short stories by Walter Lockwood.

Walt Lockwood’s Drinking with Dead Friends involves confrontations with the self and one’s choices in many stages of life.  Examples abound: two girls jealous of each other in their teen years, middle-aged characters making choices that could derail their lives through loneliness, and some of the many poignant tales in the collection, including “Light Bearer,” “The Last Selfie,” “Abishag,” and “Cocktail Piano Player.” The title story involves this confrontation at the deepest level, a prodigal son tale with dead friends to accompany the main character, who must review his life choices in an agonizing way. He is forced through refining fire to finally be thankful for the passage, recognizing at last that he too has joined them on the other side. The tales involve strategies from magic realism to Hemingwayesque brevity, with a wide variety of clearly defined characters and situations, careful use of biblical passages, lush scenes, interiors imagined in precise detail, and gardens as extensive and memorable in the way Shakespeare used them.  This book is a terrific memento from a master storyteller, worthy of a place in any fiction reader’s library.

Walter Lockwood is a master story teller. From the magical garden and its mysteries in the "Light Bearer," to the stark sense of awakening in "The Prodigy," to the journey of self-discovery of a man recounting his life in Drinking with Dead Friends, these stories give us people to care about as they confront life's challenges with arms and eyes open. A joy to read.

I love this book!  To me the sign of a really good story is that it evokes emotions, memories, and vivid mental pictures.  Wow.  Drinking with Dead Friends did all of that and more.  So far, though, “Gardens” has been the most captivating.  I literally could not put it down.  I am reading these stories slowly, like sipping on a great wine.

In the book's intriguing second story "Light Bearer," we behold John Emerson meeting his maker.  The details of his gardens qualify as his spiritual practice.  God is mentioned at the beginning.  God's clothes are John's attention to the beauty of earth.  The appearance of God in whales, pelicans, and moonflowers reveal the author's success at using words to describe what cannot be described with words.  He shows us a transcendent experience.  His character has the name Emerson, who historically was known as the father of transcendentalism.  John's merging with those sacred elements of earth is his rapturous payoff for a faithful, disciplined, religious life.  His brother the minister, having a badge of conferred authority, will not necessarily receive a better transcendence than does John, who has natural authority.  His authority regarding nature is visceral.  What does he witness during his transcendence?  Not another world, typically conceived of as heaven.  He sees the riches of this world, the one we actually have access to.  Why wait to cherish and protect it until judgement day?

Walter Lockwood knows how to tell a story. He’s proven it with his earlier fiction as well as his screenplays and  journalistic writing over the years, and it’s easy to imagine the tales he’s spun over campfires, in taverns, and in classrooms where he taught creative writing for several decades. His newest work, Drinking with Dead Friends and other Stories carries on his love of storytelling along with his skill and delight in the written word.

The reader picks up the author’s voice in the first story, and it’s not long before they can tell that he likes and respects his audience, as he does his craft. There’s an ease in the author’s delivery, a smoothness and grace in the description and dialogue, a gentleness in the irony and humor. It’s not surprising that the three nonhuman images that dominate the narratives are pianos, which played or standing as fixtures inhabit more than half the stories; rooms and sumptuous gardens full of colorful flowers; and horses, so often a sort of spiritual extension of grace and strength on our passage through the vagaries of life.

Passing through those vagaries are characters every bit as pleasant as the upper midwestern milieu. The reader gets along well with them because the author seems to like them too — their ordinary specialness, their confrontations with identity issues and searches for love and growth. They’re people like the readers but they’re distinctly individuals, even those reuniting over beer in the afterlife, and I felt a preciousness in almost all of their encounters with both others and themselves.

Drinking with Dead Friends is an eminently warm, thought-provoking, and readable book composed by an author who knows how to weave stories as satisfyingly as addressing good friends.

—Philip Jung, author of The Soul in There and At a Loss