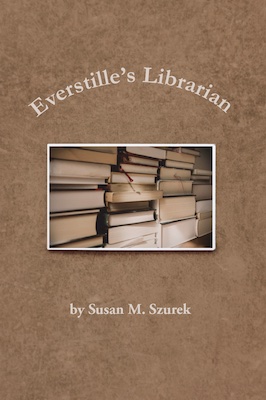 Anne watched as the three went into the Emporium to shop.

Terrence held the door and smiled at Ruth who smiled back.

He reached out to squeeze Tobias’ shoulder as they smiled at each other.

Anne thought it was a splendid thing that the three of them were finally getting along.

Three pork chops instead of two.

Three seats at the Bijou Theater for the Saturday night film.

Three people seated close together in a church pew.

The three of them appeared happy.

The three of them seemed an established alliance.

Ruth and Tobias and Terrence were upright, hard-working citizens of the town, Everstille.

And they have secrets.

Luckily, Anne is there to help keep them.

But even she does not know all of them.

The novel Everstille’s Librarian continues the stories of people from the town of Everstille.