A Frontier Team by Ruth Romeyn 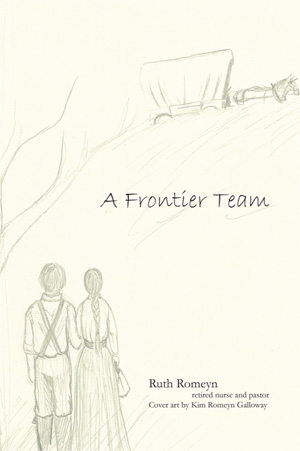 I would have chosen to live. A woman ahead of her times, yet

well grounded in her time and faith. A woman dedicated to serving

God by serving others—surrounded by those who loved and

believed in her. And by those who disapproved.

It’s a story of warm, developing relationships. Also a story of those

who attempt to control.

It’s the story of Mira, a woman who combines medical and pastoral

careers on the frontier in Dakota Territory.

It is my story if only I had lived then instead of now.

Ruth spent the first 20 years of her professional life in nursing,

including working as scrub nurse for Mayo Clinic surgeons

and then in missionary nursing in Africa, working  primarily with

leprosy patients. She also worked in the emergency department of a

She closed out her nursing career as a Poison

She is a graduate of the Methodist-Kahler

School of Nursing in Rochester MN, and also

She became an ordained Pastor of Word

and Sacrament in the Christian Reformed

She worked as Hospital Chaplain for many

years with a primary focus on Acute Care.

Ruth is married, has two daughters and three

grandsons, and has always considered her

highest calling in life to be a mother,