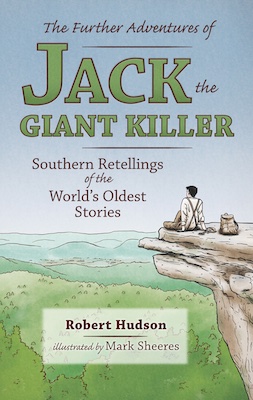 “You can almost hear the crickets chirping and the rocking chair creaking on the cabin porch as you listen to Robert Hudson’s distinctly Southern voice spinning out these trickster tales reminiscent of the Jack tales retold by Richard Chase in the middle of the last century.

“As long as there have been stories, Jack has been climbing more than beanstalks, and Hudson mines an amazingly deep repertoire of antique world folktales for these fresh retellings. He has found Jack traipsing through Babylon and ancient Sumer, trekking through Malaysia and Japan, and wandering through tales told by Homer, by Taoist monks, and by Pliny the Younger. The trickster shows up in fables by Aesop and supping at King Arthur’s Round Table.

“As you hearken to the narrative of Jack’s vanquishing of giants, his confrontations with otherworldly intimidators and real-world oppressors, you’ll recognize his picaresque encounters as archetypal episodes that represent the deepest human fears even while they embody the greatest of human comforts—story.”

— Donald R. Hettinga is the author of The Brothers Grimm: Two Lives, One Legacy and the coeditor of Sitting at the Feet of the Past: Retelling the North American Folktale for Children. He teaches children’s literature at Calvin University.

Robert Hudson wrote his first story when he was eight years old and never stopped. He’s written ten other books and plays fiddle in a string band. He and his wife, Shelley, split their time between Michigan and North Carolina, depending on the weather.

Mark Sheeres has been drawing and creating art in one form or another for as many years as he can remember. He has been designing, laying out, and illustrating books professionally since 2002.