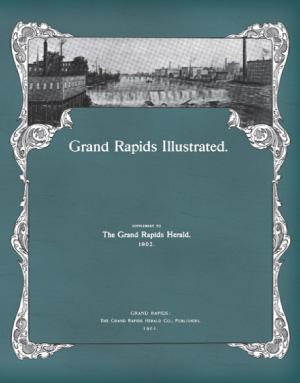 Originally published in 1902, as an insert supplement to the Grand Rapids Herald, this 48-page booklet was firmly aimed at promoting the City of Grand Rapids, and extolling its many virtues as the business and cultural center of middle Michigan.  At the time of its appearance in 1902, Grand Rapids was at the beginning of an astonishing wave of growth and prosperity that was to continue unabated until the nation-wide economic depression of the 1930s.  Of particular importance to that prosperity in Grand Rapids was the continued growth and success of the furniture industry that had, a few years before caused the recognition of the city as the ‘Furniture Capital of the World’.

Though originally printed and distributed in large quantities, today this compendium of local business and culture is quite rare, placing beyond the reach of many.  The profiles of local businesses and cultural institutions contained in this faithful reproduction of the original will be of interest to historians and scholars, as well as those who have an abiding curiosity about Grand Rapids, and what has come before.