A History and Directory of Kent County 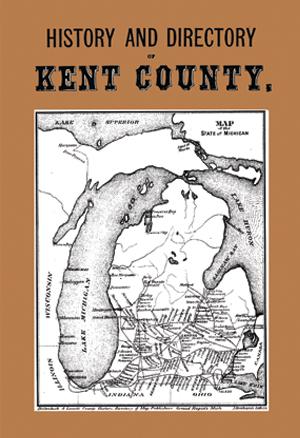 This edition is a reprint of a rather rare early history of Kent County and Grand Rapids. As was typical of early "directories" of this sort, a prose section about the area covered by the book was included, in addition to the listings of business and individuals. The historical portion was almost certainly written by Dillenback, and is viewed today as a reliable source of very early historical information about the city.

This book is the first published history of Grand Rapids and Kent County.

Because of its age, published in 1870, actual original copies of the book are quite rare. Books of this sort are occasionally found in the market, usually rather beaten up, or with pages missing, probably because they were heavily used in the decades after their initial appearance. Because of its listing of local business, etc. little thought would have been given at the time of original appearance to treating the book gingerly.

Little is known about the authors, James Dillenback, and Leavitt (his first name is not known). Dillenback was born in Vermont, and arrived with his parents, in 1847. Efforts to uncover similar information about his co-author have turned up nothing.

Special thanks to Mr. Tom Dilley (from the Grand Rapids Historical Society) for providing information about this book.