History of the City of Grand Rapids, Michigan Vol. 1 by Albert Baxter 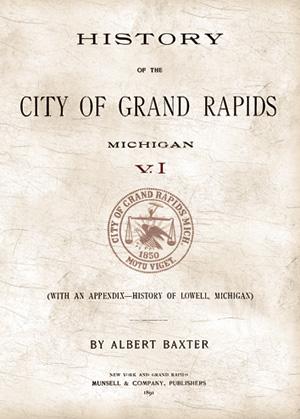 For more than a century since its original publication in 1891, Albert Baxter’s History of Grand Rapids, Michigan, has been the standard against which all other local historical works have been measured.  Sweeping and poetic, and at the same time meticulous and detailed, Baxter’s work outlines the first century of settlement in the Grand River Valley, much of it based upon his own recollections and observations while the city grew from a frontier trading post to the beginnings of a booming metropolis.  In the composition of his masterwork, Baxter brought together not only his personal acquaintance with people and events, but also a vivid and lucid writing style that is a pleasure to read.  Though long viewed as thoroughly reliable, access to the book has been limited in the past by its decidedly rare status, notwithstanding its re-publication in 1974.

This new, two-volume reproduction of the original work, faithful to the original in all respects, places one of the most important local histories of the Midwestern United States within easy reach of students, historians and those who have an interest in how Grand Rapids came to be, and who is responsible for its early growth and success.