Imagine This! 2014 An Art Prize Anthology 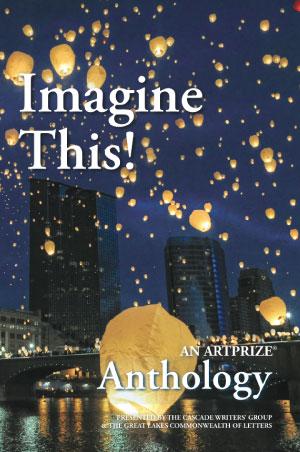 Imagine This! An ArtPrize® Anthology is back for its second year!  The 2014 edition delivers original works of short stories, essays and poems, which were selected from a multitude of entries in a nationwide writing contest.

The anthology includes stories such as "The Raid,” by Robert Downes. From the victim’s point of view, this story explores a society conquered and the shame and disillusionment that fill the void.   In contrast, “Minnesotan Test for Art,” an essay by Brent Chesley, brings us the musings of one who is inexperienced with art trying to make sense of Henry Matisse masterpieces.  The poem "Groceries," captures an inner struggle we all endure.

Imagine This! also features photos of eleven significant works of art from the past years of ArtPrize®. Readers will find first place winner Ann Loveless’s "Sleeping Bear Dune Lakeshore," and the mystic driftwood sculpture “A Matter of Time,” by Paul Baliker.  Wrapped around the front and back covers of Imagine This! is a breathtaking photo of “Lights in the Night,” a symbolic lantern launch event by Mark Carpenter and Dan Johnson from 2012 ArtPrize®.  This year’s edition ofImagine This! An ArtPrize®Anthology celebrates art from cover to cover.