Language and the Human Capacity by Richard J. Schmierer 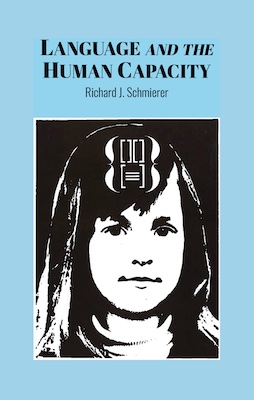 The most important element of the human capacity—that collection of attributes which give mankind its unique position in the animal kingdom—is human cognition. And the most important tool for analyzing human cognition is human language.
Human language has characteristics found in no other entity in nature. Each child is born into the world without language and, essentially without exception, in the space of a few years acquires a fully-developed language capability. Such language acquisition is the most formidable cognitive accomplishment of any human being. Each child accomplishes this feat solely as a result of being in the presence of sound produced by caregivers, using that experience to construct an internalized language which is basically identical to that to which she is exposed. She will do this despite the fact that the language she hears is limited, sometimes incorrect, and often spoken imprecisely. The language (or languages) which she acquires embody considerable complexity in their sound, grammar and meaning systems. Her ability to so acquire language disappears after about the age of seven.
No other creatures, including our closest genetic cousins the primates, acquire language, even when exposed to the same language environment as a human infant. All human societies possess language, and all human languages are similarly constructed and equivalent in their cognitive features and their ability to conceptualize and communicate.
The emergence of human language a few tens of thousands of years ago led to an exponential increase in the efficacy of human cognition, causing our species to emerge in such a relatively short span of evolutionary time as the globally-dominant species on Earth. Language certainly played a role in the fact that our species, Homo sapiens, out-survived all other species in the genus Homo, and has been the sole Homo species on Earth for tens of thousands of years.  These aspects of human language, and many more, are examined in these pages.

About the Author
Richard J. Schmierer holds a Ph.D. in linguistics from the University of Massachusetts at Amherst. His studies there in the 1970s centered on the then relatively new approach to the scientific study of language known as generative grammar. In the decades which followed, while pursuing a professional career in diplomacy, Schmierer maintained an avocational interest in language and linguistics. After completing his diplomatic career he returned to the field to explore how linguistics, and our understanding of human language, had advanced in the intervening years. This book is the result of that exploration.