My Name is Aram, Too by Aram Kabodian 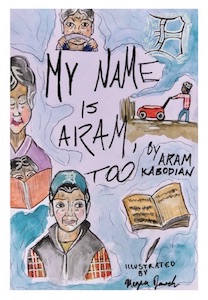 In his first collection of poetry, Aram Kabodian examines his past, present, and future selves; in the midst of this examination, he speaks with and about influential people in his life, including his parents, grandfather, a teacher, a poet mentor, and the author, William Saroyan (from whom the title is inspired).

I didn’t know he could write like this. I’ve only seen him reading the story of my life. His poems were a revelation. Best poems I’ve ever read. Except for the ones I wrote. One of our famous poets, you might say.

“Aram Garoghlanian” (from My Name is Aram)

He really poemed it up.

if a poem is an apple blossom

and who when where says why not

his poems are aren’t and will be. hooray.

As I lay dying, I wished he had written this book of poems earlier.

If Bill could have not rhymed like this, oh my goodness. The places he could have gone. Shall I compare these poems to a summer day? Probably not, but a late fall day for sure.

Aram Kabodian received the 2016 Middle School Teacher of the Year award from the Michigan Council of Teachers of English. Aram is a second generation Armenian-American, husband, and father who juggles, sings, and dances as often as possible.  His poetry has appeared in Voices of Michigan, an Anthology of Michigan Authors, as well as at Lansing Poetry Club meetings, Red Cedar Writing Project activities, and on his blog at kabod1.edublogs.org