Out of Stieglitz Park by Andrew Jefchak 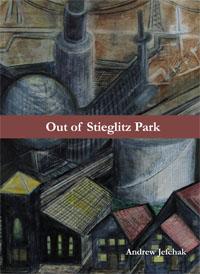 This group of interconnected stories looks at a small community in Northwest Indiana before and after it is severely damaged by an explosion and fire at the refinery which virtually surrounds it.  The lives of all the residents of Stieglitz Park change after they’re forced to move out, but some of them carry psychological baggage away from the place which surfaces occasionally, affecting isolated moments of pain and pleasure. For the beautiful, self-absorbed Geraldine Stillman, Stieglitz is a crude slum where her father was murdered. She is obsessively pursued by Richie Bowman, for whom Stieglitz is home turf where he can dominate, much to the dismay of  Chet Puntillo, a local cop who acts bravely in the explosion’s  aftermath.

Out of Stieglitz Park reflects stretches of life during four different decades (1949-1971), ultimately focusing on an aspiring young actor named Lou Fronczek, who remembers a rough neighborhood which was nonetheless fun to grow up in. In some ways, Lou brings the spirit of that lost community into his love for Maggie Conroy, a girl from the other side of town whom he marries just before he gets seriously wounded in Vietnam. Their passionate relationship is threatened when Lou reconnects with Geraldine, who was once his babysitter in Stieglitz Park.
While it lives, and even long after it dies, the locale is itself a character in these stories, touching each of its inhabitants, a catalyst for some of them to dream big.