Past and Present of Washtenaw County, Michigan by Samuel W. Beakes (1906) in 2 volumes; Volume 2: Historical 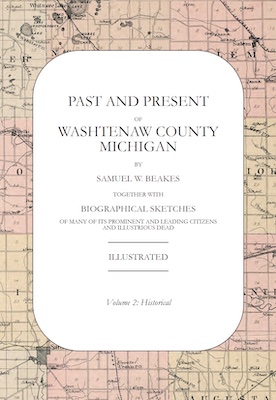 The historical part is the work of Samuel W. Beakes

(from Wikipedia) Beakes was born in Sullivan County, New York and attended Wallkill Academy in Middletown, New York. He graduated from the law department of the University of Michigan at Ann Arbor in 1883, was admitted to the bar the same year, and commenced practice in Westerville, Ohio.

Beakes was elected as a Democrat from Michigan's 2nd District to the United States House of Representatives for the Sixty-third and Sixty-fourth Congresses, serving from March 4, 1913 to March 3, 1917.

He is buried in Forest Hill Cemetery in Ann Arbor, Michigan.