Magic in the World and other stories by Walter Lockwood 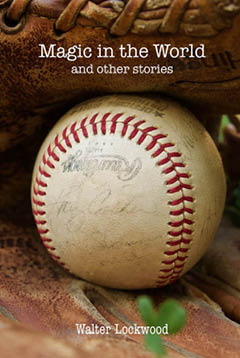 Some of the stories in this book involve baseball, a sport that has at times provided magic in the world.  The final story is not fiction but a travel memoir of a 1983 baseball trip out of which grew the author’s sense of the game’s magic.  Some are coming of age stories: a boy who receives words to treasure in his heart from a famous baseball announcer; a teenage carnival worker who finds his life with the House of David baseball team; a child’s unlocking of the mystery and magic of words. Other stories involve a variety of central characters and complications: an old man stuck in a nursing home with his childhood nemesis; a tire technician who becomes a dancing cowboy on Friday nights; a man whose irritating dog reflects both the love and dysfunction of his family.  These stories and others make up this volume of seventeen stories (all but one published for the first time) by Walter Lockwood.

Walt Lockwood's Magic in the World is a compulsively readable treat, a collection of stories that somehow manages to be both unsettling and comforting. Lockwood understands and depicts in moving and humorous detail the challenges of youth and age--and the years between. His stories are located firmly and lovingly in the landscape of West Michigan, and woven throughout the book are his love of baseball, music, fishing, and the written word, as well as his persistent but often jaundiced concern with religion in an increasingly secular world. His characters are imperfect strivers whose flaws Lockwood records unsparingly, but always with grace and humane affection. All in all, Magic in the World lives up to its title. And the collection's one piece of non-fiction, The Great 83 Baseball Tour, provides a fittingly clear-eyed summation of Lockwood's love for that world. Get your own copy of Magic in the World and enjoy the company of a masterful storyteller.
--Arnold Johnston, fiction writer, playwright, poet, author of Swept Away and Where We're Going, Where We've Been.
"Magic in the World, the title piece, is a great story.  It reads like a fable...events and people seem otherworldly...magical.  From Olivia's first contact with letters and words, it is about adventure, about discovery, about surprise...about magic.  Artful from the first word to the last."
--GF Korreck, author of Lowell Diary, editor of Busy Griefs, Raw Towns.

Other books by Walter Lockwood: