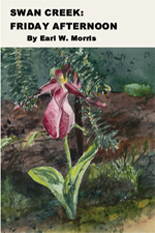 One Friday afternoon in October 1949, five young men cajole a female high school student into their car and drive out to the State Game Area where they gang rape her, mistakenly convinced she was hungry for sex. The driver of the car did not participate.

Tom Morgan, a member of the same class as the rapists hears about the event from the man who drove the car. Tom resolves to convince the victim that it was a crime and the rapists should be punished. But he is unable to do so in part because of fear. He broods for fifty years until his retirement as a professor at Michigan State University. Soon after retirement he gathers a group of friends to help him in his quest to identify the rapists and get them punished.

Tom and his friends learn someone has been murdering the perpetrators. Only one now remains.. A member of a militia group calling itself The Lord’s Vigilant Mission seems to be connected somehow. An important but mysterious contributor to the solution is a strange man named Harry Hall who had helped the rape victim through the aftermath.