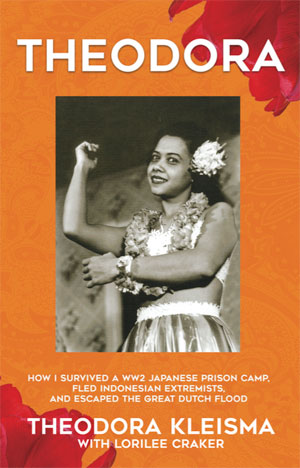 “Three times in my life, I lost everything.

Well, really four times if you count the worst loss of all—the loss of my family.”

It was 1942, and Theodora, a charming Dutch/Indonesian teenager, was uprooted from her pampered East Indies upbringing and forced to live in one of many desperate, disease-infested concentration camps set up by the occupying Japanese army. A few years later, her life was plunged into danger again from the angry Indonesian nationalists on the hunt for anyone with Dutch blood. Arriving in The Netherlands, her “mother country,” Theodora thought she had found safe haven, but was to face an epic deluge when the North Sea burst through the existing dams and flooded her quaint Dutch village.

A prisoner, refugee, immigrant, and survivor, Theodora’s story is one of faith, forgiveness and reconciliation. You will witness an untold chapter in history as you are inspired by one amazing woman’s testimony of grit and grace.