Writing from the Outskirts of Hope by Malcolm McDonald 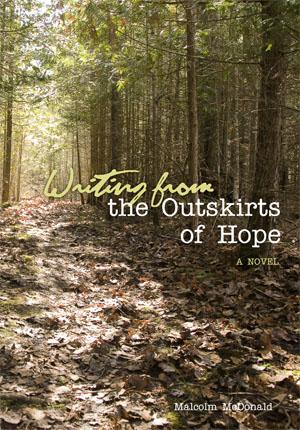 Isolated and depressed following the death of his wife, Robbie McDermott is living an aimless existence in rural Michigan – until the chance discovery of a British Library audio collection inspires him to write a novel as a means of bringing a sense of purpose to his days.

Set in England between 1944 and 1975, McDermott’s plot is centered upon his unlikely relationship with the violent Cracker McCracken, and the journey of the ill-matched pair from the bully-infested streets of their working-class childhood to their leadership of the most famous primary school in Britain.

McDermott’s immersion in his fictional world, allied to the ministrations of a local psychotherapist, afford him a renewed sense of optimism. Despite intermittent periods of doubt about his writing and recurring episodes of grief, he appears to be on the way back – until his emergence from solitude leads to the resurgence of his long-dormant libido and the subsequent arrival of guilt as a new companion.

Moving back and forth between the emotional minefield he treads in present-day, rural America, and the tumultuous years of his English past, ‘Writing from the Outskirts of Hope’ charts McDermott’s struggle for survival as he battles his personal demons.