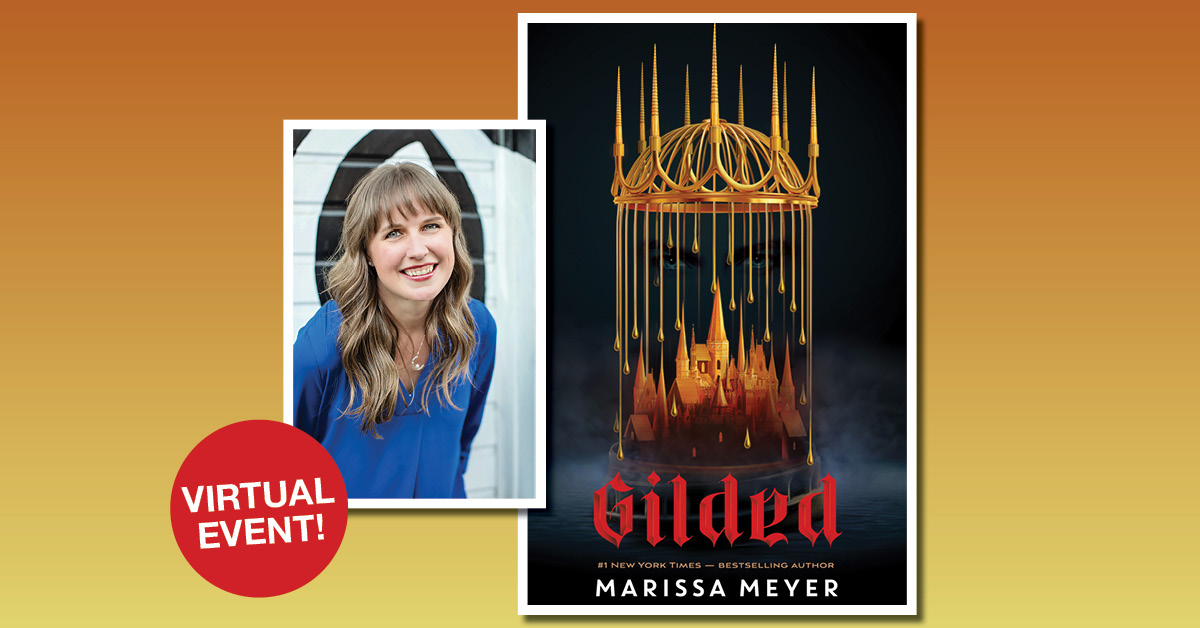 In partnership with Macmillan Publishing we invite you to join multi-#1 New York Times-bestselling author Marissa Meyer as she celebrates her return to fairytale retellings with Gilded, a haunting retelling of Rumpelstiltskin. The event will include interactive polls, an audience Q&A, and more! This event is free but you must pre-register.

A limited number of preorders will receive the opportunity to meet one-on-one with Marrisa at 7pm ET on Tuesday, November 2 via Zoom. Spots are limited so order your book now before they sell out! If you are one of the chosen, a link will be sent to confirm your participation on November 1.

Preorder Gilded here for a chance to meet one-on-one with Melissa!

In Gilded, #1 New York Timesbestselling author Marissa Meyer returns to the fairytale world with this haunting retelling of Rumpelstiltskin.

Long ago cursed by the god of lies, a poor miller's daughter has developed a talent for spinning stories that are fantastical and spellbinding and entirely untrue.

Or so everyone believes.

When one of Serilda's outlandish tales draws the attention of the sinister Erlking and his undead hunters, she finds herself swept away into a grim world where ghouls and phantoms prowl the earth and hollow-eyed ravens track her every move. The king orders Serilda to complete the impossible task of spinning straw into gold, or be killed for telling falsehoods. In her desperation, Serilda unwittingly summons a mysterious boy to her aid. He agrees to help her… for a price. Love isn't meant to be part of the bargain.

Soon Serilda realizes that there is more than one secret hidden in the castle walls, including an ancient curse that must be broken if she hopes to end the tyranny of the king and his wild hunt forever.

Marissa Meyer is the #1 New York Times–bestselling author of the Renegades Trilogy, The Lunar Chronicles series, the Wires and Nerve graphic novels, and The Lunar Chronicles Coloring Book. Her first standalone novel, Heartless, was also a #1 New York Timesbestseller. Marissa created and hosts a podcast called The Happy Writer. She lives in Tacoma, Washington, with her husband and their two daughters.

"The queen of fairy-tale retellings is back, this time with “Rumpelstiltskin” as her inspiration, and the result is a gorgeously intricate tale that will have readers locked in from the start. ... Meyer weaves an enchanting tale filled with whimsically magical moments and some serious suspense. [She] knows how to capture fantastical worlds, and this one is pure perfection for her fans and new readers alike." —Booklist

"Cornered by the wicked Erlking on the night of the wild hunt, Serilda claims that she can spin straw into gold, a lie that saves her life but lands her in the Erlking’s castle on the next full moon with a room full of straw and an impossible task. Fortunately, Gild, an impish (and attractive) poltergeist shows up, offering help in exchange for Serilda’s golden necklace. Gild easily fulfills his end of the bargain and does so a second time for Serilda’s ring; when the Erlking makes the third demand, however, Serilda has nothing left to give Gild, and the romance that has sparked between them only complicates things further. ...Serilda is as much a trickster as she is heroine, casting lies as she sees fit, but she’s a genuinely caring soul, making it pleasing to watch her romance blossom with the equally clever and equally sweet Gild and heartbreaking to see it tested." —Bulletin of the Center for Children's Books, recommended

"Meyer explores the power of fiction in this inventive “Rumpelstiltskin” reimagining. Every full moon, the sadistic Erlking and his undead coterie enter the mortal realm to steal wandering children and hunt magical creatures. ... Serilda Moller, 18, knows to remain indoors on such nights, but when she hears hellhounds chasing two moss maidens near her family’s cabin in Marchenfeld, she feels compelled to intervene. Serilda successfully secrets the duo into the root cellar but is then confronted by the Erlking. Rather than betray the maidens, Serilda—a spellbinding storyteller with gold wheels for irises—falsely asserts that she is harvesting straw to spin into gold. ...Serilda is despondent until a pale, redheaded teen called Gild appears and offers to complete her impossible task—for a price. Intricate worldbuilding and star-crossed romance help temper the Erlking’s brutality, and ...well-drawn characters will leave readers craving a sequel." —Publishers Weekly