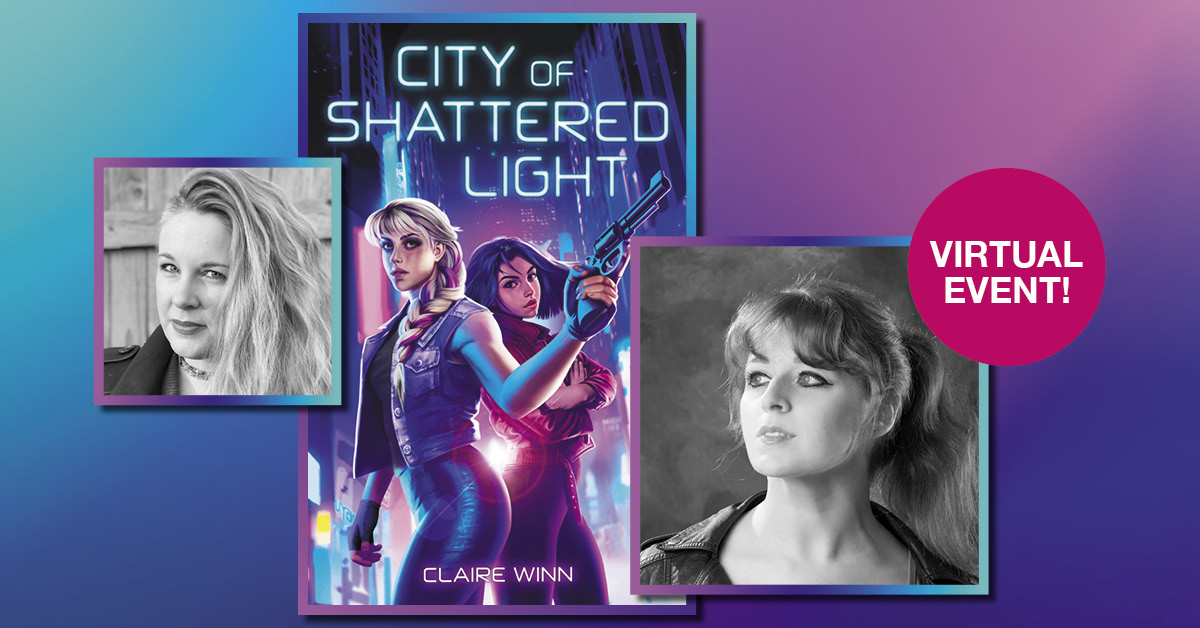 Join us for a night of Young Adult Sci-Fi with debut Michigan author Claire Winn! Claire will be in conversation with Rebecca Coffindaffer, author of Young Adult space opera duology Crownchasers. Register free.

As darkness closes in on the city of shattered light, an heiress and an outlaw must decide whether to fend for themselves or fight for each other.

As heiress to a powerful tech empire, seventeen-year-old Asa Almeida strives to prove she's more than her manipulative father's shadow. But when he uploads her rebellious sister's mind to an experimental brain, Asa will do anything to save her sister from reprogramming--including fleeing her predetermined future with her sister's digitized mind in tow. With a bounty on her head and a rogue AI hunting her, Asa's getaway ship crash-lands in the worst possible place: the neon-drenched outlaw paradise, Requiem.

Gunslinging smuggler Riven Hawthorne is determined to claw her way up Requiem's underworld hierarchy. A runaway rich girl is exactly the bounty Riven needs—until a nasty computer virus spreads in Asa's wake, causing a citywide blackout and tech quarantine. To get the payout for Asa and save Requiem from the monster in its circuits, Riven must team up with her captive.

Riven breaks skulls the way Asa breaks circuits, but their opponent is unlike anything they've ever seen. The AI exploits the girls' darkest memories and deepest secrets, threatening to shatter the fragile alliance they're both depending on. As one of Requiem's 154-hour nights grows darker, the girls must decide whether to fend for themselves or fight for each other before Riven's city and Asa's sister are snuffed out forever.

Claire Winn spends her time immersed in other worlds—through LARP, video games, books, nerd conventions, and her own stories. Since graduating from Northwestern University, she’s worked as a legal writer and freelance editor. Aside from writing, she builds cosplay props and armor, tears up dance floors, and battles with boffer swords. City of Shattered Light is her first novel.

Rebecca Coffindaffer (they/she) grew up on Star Wars, Star Trek, fantastical movies and even more fantastical books. They waited a long time for their secret elemental powers to develop, and in the interim, they started writing stories about magic and politics, spaceships, far-off worlds, and people walking away from explosions in slow motion. These days they live in Kansas with their family, surrounded by a lot of books and a lot of tabletop games and one big fuzzy dog. They're the author of the YA space opera duology Crownchasers, out now from HarperTeen, and Thronebreakers, coming 10/12/21.