A conversation with Aaron Shulman and Catherine Chung 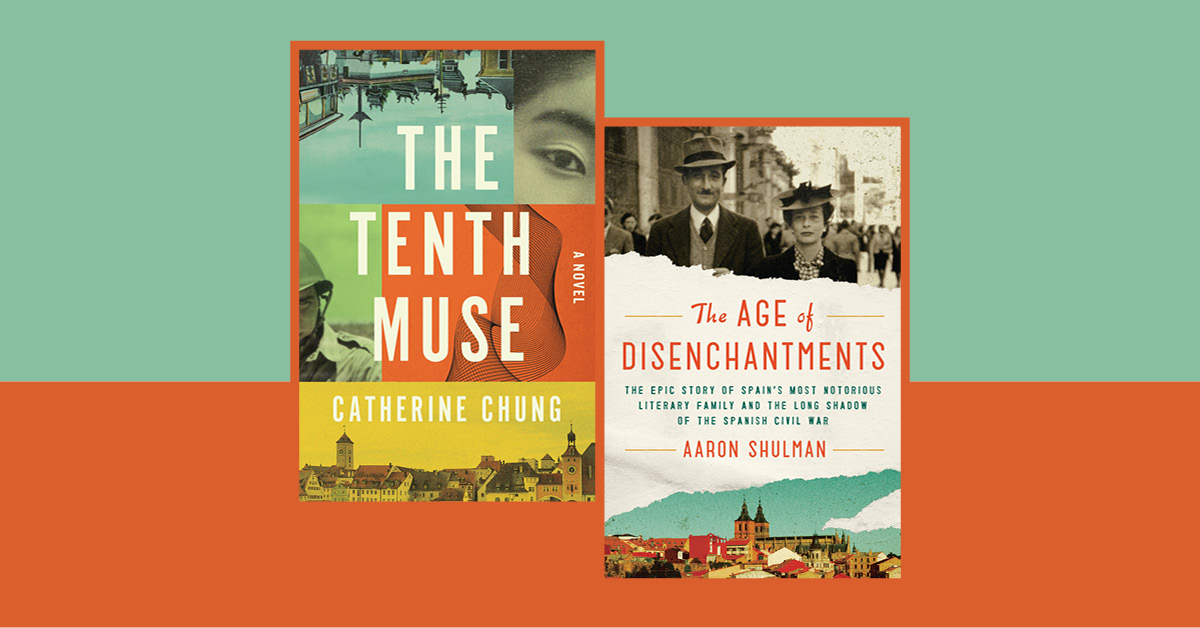 Join us in conversation with authors Aaron Shulman and Catherine Chung. Aaron is a Michigan native and author of The Age of Disenchantments: The Epic Story of Spain's Most Notorious Literary Family and the Long Shadow of the Spanish Civil War. Catherine is an award winning author and will be discussing her new release The Tenth Muse.

Seating at the event will be first-come first-served. This event will be a standing-room crowd, so if you require a seat for medical reasons, please contact us in advance to make arrangements.

The Tenth Muse From childhood, Katherine knows she is different, and that her parents are not who they seem to be. But in becoming a mathematician, she must face the most human of problems—who is she? What is the cost of love, and what is the cost of ambition?

On her quest to conquer the Riemann Hypothesis, the greatest unsolved mathematical problem of her time, she turns to a theorem with a mysterious history that holds both the lock and key to her identity, and to secrets long buried during World War II in Germany. Forced to confront some of the most consequential events of the twentieth century and rethink everything she knows of herself, she strives to take her place in the world of higher mathematics and finds kinship in the stories of the women who came before her—their love of the language of numbers connecting them across generations.

In The Tenth Muse, Catherine Chung offers a gorgeous, sweeping tale about legacy, identity, and the beautiful ways the mind can make us free.

In this absorbing and atmospheric historical narrative, journalist Aaron Shulman takes us deeply into the circumstances surrounding the Spanish Civil War through the lives, loves, and poetry of the Paneros, Spain’s most compelling and eccentric family, whose lives intersected memorably with many of the most storied figures in the art, literature, and politics of the time—from Neruda to Salvador Dalí, from Ava Gardner to Pablo Picasso to Roberto Bolaño.

Weaving memoir with cultural history and biography, and brought together with vivid storytelling and striking images, The Age of Disenchantments sheds new light on the romance and intellectual ferment of the era while revealing the profound and enduring devastation of the war, the Franco dictatorship, and the country’s transition to democracy.

A searing tale of love and hatred, art and ambition, and freedom and oppression, The Age of Disenchantments is a chronicle of a family who modeled their lives (and deaths) on the works of art that most inspired and obsessed them and who, in turn, profoundly affected the culture and society around them.

Catherine Chung is the recipient of a National Endowment for the Arts fellowship and a Director's Visitorship at the Institute for Advanced Study in Princeton. She was a Granta New Voice, and won an Honorable Mention for the PEN/Hemingway Award with her first novel, Forgotten Country, which was a Booklist, Bookpage, and San Francisco Chronicle Best Book of 2012. She has a degree in mathematics from the University of Chicago, and worked at a think tank in Santa Monica before going to Cornell University for her MFA. She has published work in The New York Times and Granta, and is a fiction editor at Guernica Magazine. She lives in New York City.

Aaron Shulman is the author of The Age of Disenchantments: The Epic Story of Spain’s Most Notorious Literary Family and the Long Shadow of the Spanish Civil War (Ecco/HarperCollins, March 2019). After growing up in Michigan, Aaron attended Johns Hopkins as an undergrad and then the University of Montana, where he received his MFA in creative writing. A former Fulbright scholar, his work has appeared in The Believer, The New Republic, The American Scholar, and the Los Angeles Review of Books, among many other places. An editorial coach, collaborative writer, and developmental editor, he works with Idea Architects Literary Agency to bring the research of visionary scientists and thinkers to a wide readership. He lives with his family in Santa Barbara, California.

The Age of Disenchantments: The Epic Story of Spain's Most Notorious Literary Family and the Long Shadow of the Spanish Civil War (Hardcover)

The Tenth Muse: A Novel (Hardcover)