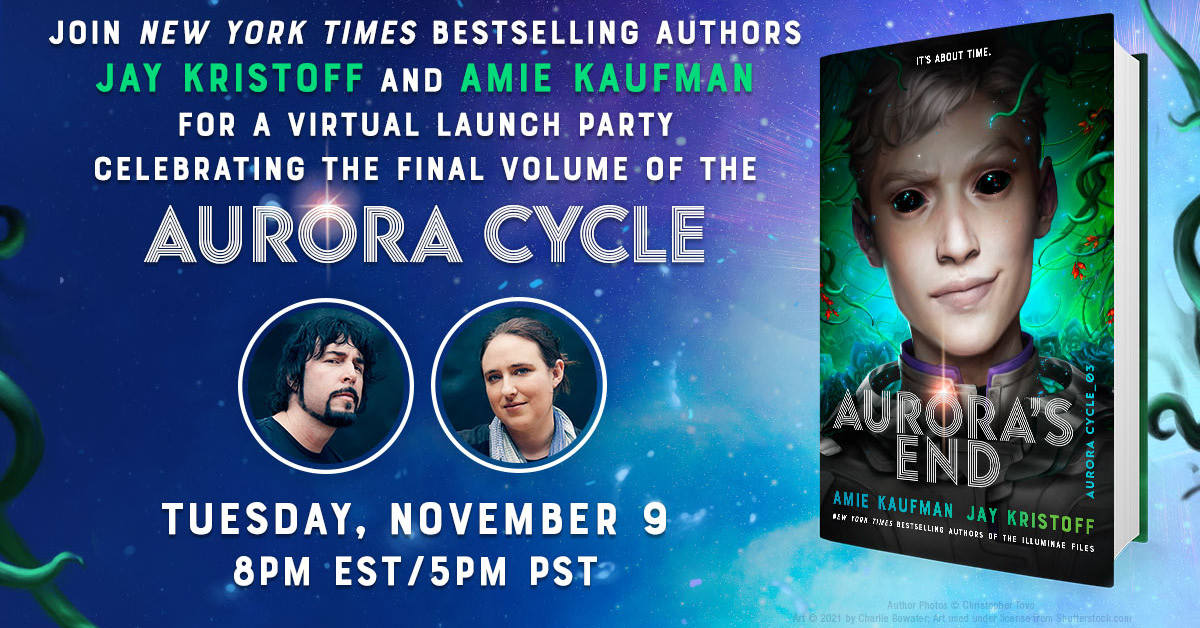 In partnership with Penguin Random House Publishing we are honored to present An Evening with Amie Kaufman + Jay Kristoff to celebrate the hardcover release of Aurora’s End. Amie and Jay will join us virtually on Tuesday, November 9th at 8 PM ET. To join in the fun a purchase of Aurora’s End is required by no later than November 8th MIDNIGHT. You will be sent a link to the event on November 9th no later than 7:30pm ET.

The squad you love is out of time. Prepare for the thrilling finale in the epic, best-selling Aurora Cycle series about a band of unlikely heroes who just might be the galaxy's last hope for survival.

Is this the end?

What happens when you ask a bunch of losers, discipline cases, and misfits to save the galaxy from an ancient evil? The ancient evil wins, of course.

When we last saw Squad 312, they working together seamlessly (aka, freaking out) as an intergalactic battle raged and an ancient superweapon threatened to obliterate Earth. Everything went horribly wrong, naturally.

But as it turns out, not all endings are endings, and the team has one last chance to rewrite theirs. Maybe two. It's complicated.

Cue Tyler, Kal, and Auri: uniting with two of the galaxy’s most hated villains? Um, okay. That, too.

Actually saving the galaxy, though? Now that will take a miracle.

Amie Kaufman and Jay Kristoff are the New York Times bestselling co-authors of the Illuminae Files and the Aurora Cycle. Amie has also co-written (with Meagan Spooner) the Starbound and the Unearthed trilogies. Jay is the author of the LIFEL1K3 series, as well as the Nevernight Chronicle and the Lotus War series for adults. Collectively, Amie and Jay stand 12'5" tall and live in Melbourne, Australia, with two long-suffering spouses, two rescue dogs, and a plentiful supply of caffeine. They met thanks to international taxation law, and stuck together due to a shared love of blowing things up and breaking hearts.