An Evening with Johnny and Becki Agar 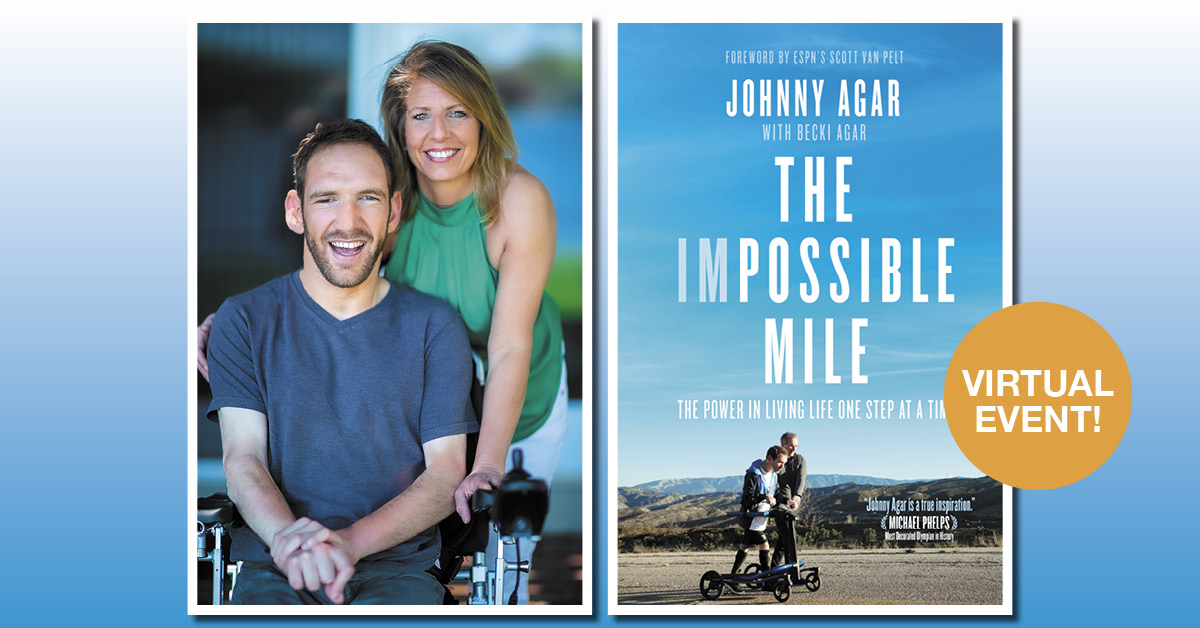 Johnny Agar gained international attention when he walked a mile in his church’s annual 5K. That sounds like an odd reason for fame, except for the reality of Johnny’s severe cerebral palsy. After succeeding at that first mile, he eventually went on to overcome the odds to compete in Ironman triathlons. Johnny and Becki Agar join us to talk about their book The Impossible Mile. ​​​​​​Johnny and Becki will be in conversation with Terri DeBoer - WoodTV8 Meteorologist.

An incredible story of Johnny Agar, an athlete born with cerebral palsy and whom doctors thought would never walk, overcoming the odds to compete in Ironman triathlons. As featured on ESPN, ABC World News Tonight, and many national media outlets, this powerful memoir is a testament to the power of family, faith, and extraordinary courage.

In The Impossible Mile, told with candor and lightened with humor, Johnny shows what is possible time and time again. His story starts in a Michigan hospital, where he is born eleven weeks premature. An ultrasound reveals bleeding on his brain, and he is diagnosed with cerebral palsy, a condition that hinders a person’s ability to control muscle movement. Doctors say he will likely have intellectual disabilities and that he will never walk. Despite the pending challenges, Johnny’s parents choose to raise their firstborn without limitations on his abilities. This decision would forever shape Johnny’s life, his enduring belief in himself and his dreams.

Growing up, Johnny aspires to be an athlete like his father, Jeff, once a relief pitcher for the Detroit Tigers. Sports was in the young boy’s blood. But how could he become an athlete? He can’t walk unassisted, and his muscles have a mind of their own. To give Johnny a taste of competition, the father and son start participating in 5K road races, Jeff pushing Johnny in a modified wheelchair.

Until one day Johnny has a bold idea. He will chase his dream—literally—of becoming an athlete by walking part of a race. Assisted by his father, Johnny trains for the impossible mile. What he doesn’t know is that his bold idea will do more than change just his life forever. Johnny’s story shows the impact of a life lived to its fullest, from the first difficult steps in training, to becoming a brand ambassador for global apparel company Under Armour and now serving as an inspiration for not only other professional athletes, but for anyone facing their own impossible mile.

Come walk a mile in Johnny’s shoes, and realize, like Johnny, you never walk alone, and anything is possible, if you’ll just keep putting one foot in front of the other.

PRAISE FOR The Impossible Mile:

“Johnny Agar is a true inspiration as a person and an athlete. Where most might see nothing but obstacles, he sees nothing but opportunities. Johnny’s commitment to pursuing his dreams and sharing his journey along the way is a tremendous gift to us all.” —Michael Phelps, twenty-three-time Olympic gold medalist swimmer

About the Authors
JOHNNY AGAR gained international attention when he walked a mile in his church’s annual 5K. That sounds like an odd reason for fame, except for the reality of Johnny’s severe cerebral palsy. Even with a lifetime of physical therapy before this race, the longest distance he’d ever previously walked was twenty-three steps.

Since that incredible feat, Johnny and his father Jeff have partnered in countless races, including the infamous Ironman World Championship in Kona, Hawaii, which was chronicled by NBC. Johnny has been featured on The Today Show, Inside Edition, NBC Nightly News, People, USA Today, Huffington Post, and ESPN’s Sportscenter. His tenacity and indelible spirit have inspired numerous professional and Olympic athletes, and Johnny is a Brand Ambassador for the sports apparel company Under Armour. Even so, he will tell you that his crowning accomplishment was getting post-race recognition from his biggest sponsor in the form of twenty-gallons of his favorite Meijer ice cream. Now Johnny gives motivational speeches to inspire others to overcome their challenges and chase their dreams, one step at a time. Among his other roles, Johnny serves as the Athletic Ambassador for the Cerebral Palsy Foundation, and he’s proud to have earned a dual major in Sports Management and Business Administration from Aquinas College in Grand Rapids, Michigan. The Impossible Mile is Johnny’s first book.

BECKI AGAR is an advocate, philanthropist, and mother of three children. After beginning a career as a credit analyst, Becki’s passion for children led her to open a daycare. When she had children of her own, she closed the daycare to raise them, an experience that has been the greatest blessing of her life.

Becki currently fundraises and advocates for organizations that have been instrumental in helping children who have special needs to be as independent as possible on their journeys through life. She graduated from Grand Valley State University with a degree in Sociology and a minor in Psychology. The Impossible Mile is Becki and Johnny’s first book.

The Impossible Mile: The Power in Living Life One Step at a Time (Hardcover)