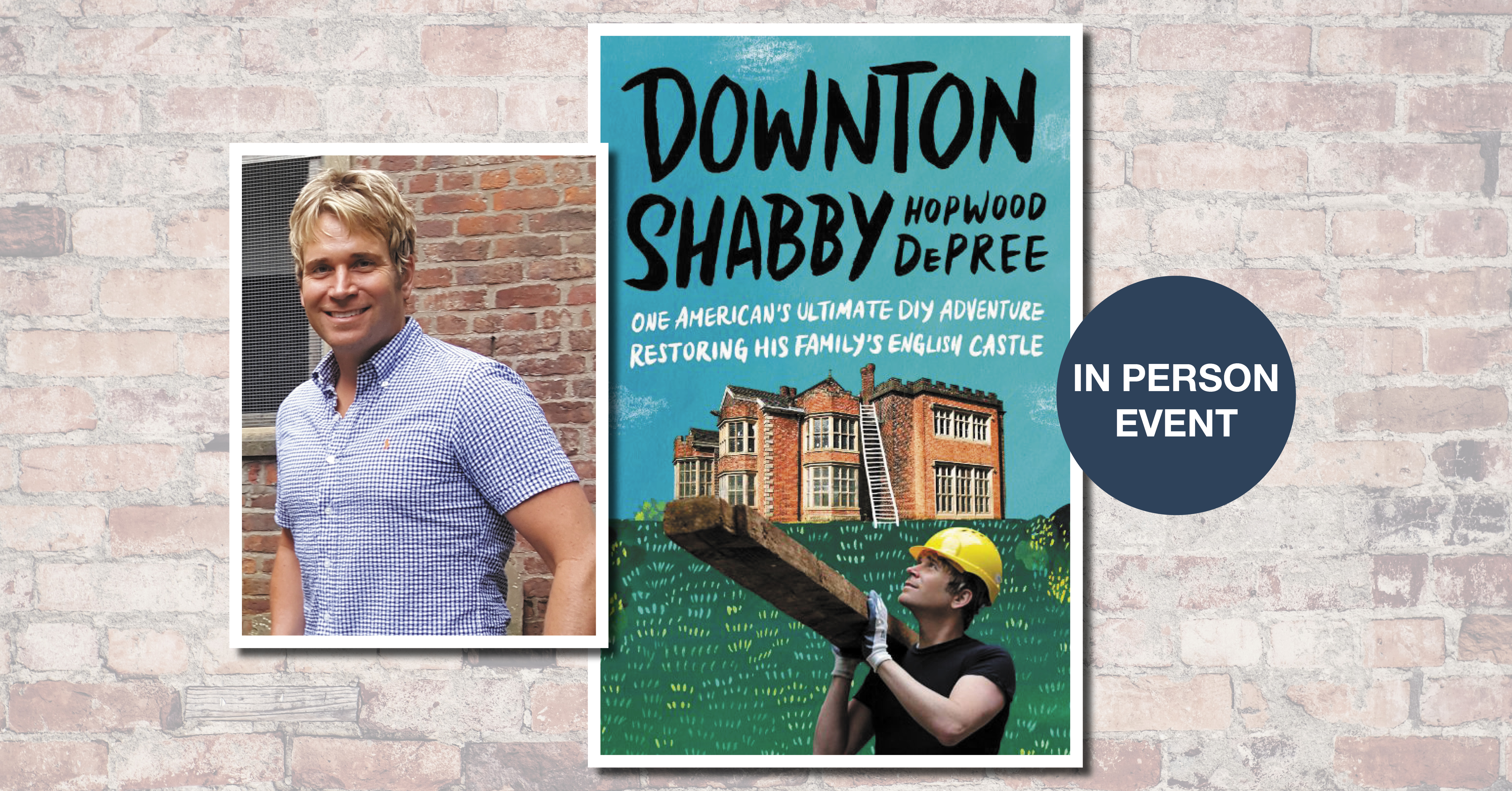 Join west Michigan native Hopwood DePree to celebrate the release of  his new book Downton Shabby: One American's Ultimate DIY Adventure Restoring His Family's English Castle! He’ll entertain us with stories and video about the restoration of his ancestral home, the historic Hopwood Hall,  in northern England.

Attendance is free, however, preregistration is required on Eventbrite. Receive an invitation to a private reception with the author immediately following the event with your preorder purchase  of the book at registration.

About the Book:
HGTV meets Downton Abbey! A ready-for-TV story—with charm and humor in abundance—about a Los Angeles producer who moves to England to save his ancestral castle from ruin.

Hollywood producer Hopwood DePree had been told as a boy that an ancestor—who he was named for—had left his family’s English castle in the 1700s to come to America. One night after some wine and a visit to Ancestry.com, Hopwood discovered a photograph of a magnificent English estate with a familiar name: Hopwood Hall, a 60-room, 600-year-old grand manor on 5,000 acres. And with that, Hopwood DePree’s life took an almost fairytale turn.

Hopwood Hall, in northwest England, was indeed his family’s ancestral home. It had been occupied continuously by the Hopwood family for five centuries until the last remaining male heirs were killed in World War I. Since then, the Hall had fallen gradually into disrepair and was close to collapse. When Hopwood visited, he discovered trees growing in the chimneys, holes in the roof, and water sluicing down walls. It would take many millions to save the Hall—millions that Hopwood certainly didn’t have—but despite the fact that he lived in Los Angeles and had no construction skills, Hopwood DePree came to a conclusion: He would save Hopwood Hall.

Downton Shabby—the name Hopwood coined for the glorious ruin—traces Hopwood DePree’s adventures as he gives up his life in Hollywood and moves permanently to England to save Hopwood Hall from ruin. But the task is far too big for one person, of course. Hopwood discovers that the Hall comes with an unforgettable cast of new neighbors he can call on for help—from the electrician whose mum had fond memories of working at the Hall to gruff caretaker Bob, and the local aristocrats who (sort of) come to accept Hopwood as one of their own. Together, as they navigate the trials and triumphs of trying to save an actual castle, Hopwood finds himself ever further from the security of his old life, but comes to realize that, actually, he’s never been closer to home.

About the Author:
Hopwood was born and raised in Holland, Michigan, before graduating from The University of Southern California.  He worked in the Los Angeles film industry for many years and co-founded The Waterfront Film Festival as well as a production company, TicTock Studios, both based in West Michigan.  Additionally, he was appointed by two Governors to The Michigan Film Office Advisory Council, where he served for nine years.  He currently lives in Manchester, England, where he is restoring his 600-year-old ancestral home, Hopwood Hall Estate. Hopwood's YouTube channel & social media that follow the renovations can be found at @HopwoodXIV or www.HopwoodXIV.com